It Comes Faster Every Year 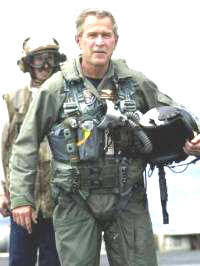 It seems like only yesterday that the country was enthralled with the president in his sexy flightsuit. Women were swooning, manly GOP men were commenting enviously on his package. But there were none so awestruck by the sheer, testosterone glory of Bush's codpiece as Tweety:

MATTHEWS: Let's go to this sub--what happened to this week, which was to me was astounding as a student of politics, like all of us. Lights, camera, action. This week the president landed the best photo op in a very long time. Other great visuals: Ronald Reagan at the D-Day cemetery in Normandy, Bill Clinton on horseback in Wyoming. Nothing compared to this, I've got to say.

Katty, for visual, the president of the United States arriving in an F-18, looking like he flew it in himself. The GIs, the women on--onboard that ship loved this guy.

Ms. KAY: He looked great. Look, I'm not a Bush man. I mean, he doesn't do it for me personally, especially not when he's in a suit, but he arrived there...

MATTHEWS: No one would call you a Bush man, by the way.

Ms. KAY: ...he arrived there in his flight suit, in a jumpsuit. He should wear that all the time. Why doesn't he do all his campaign speeches in that jumpsuit? He just looks so great.

MATTHEWS: I want him to wa--I want to see him debate somebody like John Kerry or Lieberman or somebody wearing that jumpsuit.

Mr. DOBBS: Well, it was just--I can't think of any, any stunt by the White House--and I'll call it a stunt--that has come close. I mean, this is not only a home run; the ball is still flying out beyond the park.

MATTHEWS: Well, you know what, it was like throwing that strike in Yankee Stadium a while back after 9/11. It's not a stunt if it works and it's real. And I felt the faces of those guys--I thought most of our guys were looking up like they were looking at Bob Hope and John Wayne combined on that ship.

MATTHEWS: Fareed, you're watching that from--say you were over in the Middle East watching the president of the United States on this humongous aircraft carrier. It looks like it could take down Syria just one boat, right, and the president of the United States is pointing a finger and saying, `You people with the weapons of mass destruction, you people backing terrorism, look out. We're coming.' Do you think that picture mattered over there?

Mr. ZAKARIA: Oh yeah. Look, this is a part of the war where we have not--we've allowed a lot of states to do some very nasty stuff, traffic with nasty people and nasty material, and I think it's time to tell them, you know what, `You're going to be help accountable for this.'

MATTHEWS: Well, it was a powerful statement and picture as well.

Two weeks later, They were still talking about it:

MATTHEWS: What do you make of this broadside against the USS Abraham Lincoln and its chief visitor last week?

LIDDY: Well, I-- in the first place, I think it's envy. I mean, after all, Al Gore had to go get some woman to tell him how to be a man [Official Naomi Wolf Spin-Point]. And here comes George Bush. You know, he's in his flight suit, he's striding across the deck, and he's wearing his parachute harness, you know --- and I've worn those because I parachute --- and it makes the best of his manly characteristic. You go run those, run that stuff again of him walking across there with the parachute. He has just won every woman's vote in the United States of America. You know, all those women who say size doesn't count --- they're all liars. Check that out. I hope the Democrats keep ratting on him and all of this stuff so that they keep showing that tape.

"You know, it's funny. I shouldn't talk about ratings," he [Matthews] said, also gazing at Bush's crotch. "But last night was a riot because ... these pictures were showing last night, and everybody's tuning in to see these pictures again."

And they wonder why we no longer take them seriously.

I've said it before and I'll say it again:

A Cod-piece can fool them all
Make them think you're large
Even if you're small
Just be sure you don't fool yourself
For it's still just imagination
To be sure it works like a lure
And will raise a wench's expectations
But have a care you have something there
Or the night will end in frustration
Brave New Films has made an impressive short film for Codpiece Day that you can view here and send to all your friends. Be sure to make your own "Mission Accomplished" banner and enter the contest. I did, as you can see.

Update: Speaking of conservative failure, if you are in DC get your codpiece over to The National Press Club for the big luncheon smackdown tomorrow:

Space is still available for the luncheon debate between Robert Kuttner, co-editor of The American Prospect, and William Kristol, editor of the Weekly Standard and a leading conservative spokesman. The lunch is from 12:30 p.m. to 2 p.m.