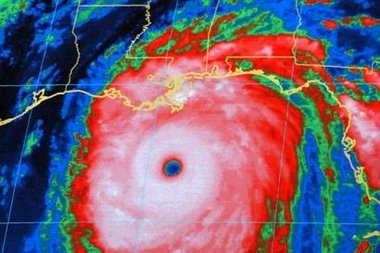 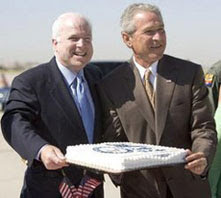 
7AM CDT — KATRINA MAKES LANDFALL AS A CATEGORY 4 HURRICANE [CNN]

7:30 AM CDT — BUSH ADMINISTRATION NOTIFIED OF THE LEVEE BREACH: The administration finds out that a levee in New Orleans was breached. On this day, 28 “government agencies, from local Louisiana parishes to the White House, [reported that] that New Orleans levees” were breached. [AP]

8AM CDT — MAYOR NAGIN REPORTS THAT WATER IS FLOWING OVER LEVEE: “I’ve gotten reports this morning that there is already water coming over some of the levee systems. In the lower ninth ward, we’ve had one of our pumping stations to stop operating, so we will have significant flooding, it is just a matter of how much.” [NBC’s “Today Show”]

11:13 AM CDT - WHITE HOUSE CIRCULATES INTERNAL MEMO ABOUT LEVEE BREACH: “Flooding is significant throughout the region and a levee in New Orleans has reportedly been breached sending 6-8 feet of water throughout the 9th ward area of the city.” [AP]

MORNING — BROWN WARNS BUSH ABOUT THE POTENTIAL DEVASTATION OF KATRINA: In a briefing, Brown warned Bush, “This is, to put it mildly, the big one, I think.” He also voiced concerns that the government may not have the capacity to “respond to a catastrophe within a catastrophe” and that the Superdome was ill-equipped to be a refuge of last resort. [AP]

MORNING — MAYFIELD WARNS BUSH ABOUT THE TOPPING OF THE LEVEES: In the same briefing, Max Mayfield, National Hurricane Center Director, warns, “This is a category 5 hurricane, very similar to Hurricane Andrew in the maximum intensity, but there’s a big big difference. This hurricane is much larger than Andrew ever was. I also want to make absolutely clear to everyone that the greatest potential for large loss of lives is still in the coastal areas from the storm surge. … I don’t think anyone can tell you with any confidence right now whether the levees will be topped or not, but there’s obviously a very very grave concern.” [AP]

MORNING — BUSH CALLS SECRETARY CHERTOFF TO DISCUSS IMMIGRATION: “I spoke to Mike Chertoff today — he’s the head of the Department of Homeland Security. I knew people would want me to discuss this issue [immigration], so we got us an airplane on — a telephone on Air Force One, so I called him. I said, are you working with the governor? He said, you bet we are.” [White House]

11AM CDT — MICHAEL BROWN FINALLY REQUESTS THAT DHS DISPATCH 1,000 EMPLOYEES TO REGION, GIVES THEM TWO DAYS TO ARRIVE: “Brown’s memo to Chertoff described Katrina as ‘this near catastrophic event’ but otherwise lacked any urgent language. The memo politely ended, ‘Thank you for your consideration in helping us to meet our responsibilities.’” [AP]

11AM CDT — BUSH VISITS ARIZONA RESORT TO PROMOTE MEDICARE DRUG BENEFIT: “This new bill I signed says, if you’re a senior and you like the way things are today, you’re in good shape, don’t change. But, by the way, there’s a lot of different options for you. And we’re here to talk about what that means to our seniors.” [White House]

4:30PM CDT — BUSH TRAVELS TO CALIFORNIA SENIOR CENTER TO DISCUSS MEDICARE DRUG BENEFIT: “We’ve got some folks up here who are concerned about their Social Security or Medicare. Joan Geist is with us. … I could tell — she was looking at me when I first walked in the room to meet her, she was wondering whether or not old George W. is going to take away her Social Security check.” [White House]