This op-ed in the Boston Globe says that surveys show citizens today are more stupid about politics than their 6th grade educated grandparents were. How can that possibly be?

Many political scientists have tried to explain away such results ever since surveys in the 1940s began turning up evidence of Americans' gross ignorance about politics. These apologists argue that Americans use shortcuts to compensate for their lack of knowledge. A voter, for example, who does not follow the daily news may nonetheless decide that he should vote for Candidate X because his local newspaper endorsed X and he generally agrees with the positions the paper takes.

Unfortunately, what the polls show is that Americans cannot make up for their lack of basic knowledge even if they shrewdly employ shortcuts. The harsh truth is that ignorant voters are sitting ducks for wily politicians. This is why millions were so easily misled when the Bush administration dropped hints that Saddam Hussein played a role in the Sept. 11, 2001, attacks. One study by the University of Maryland found that nearly 60 percent of Americans were convinced that Hussein was helping Al Qaeda when we undertook our invasion. A majority based their support for the war on this flagrant misunderstanding.

Why hasn't education helped voters become smarter about politics? Television is a big part of the explanation. Once television replaced newspapers as the chief source of news, this happened around 1965, shallowness was inescapable as Americans began judging politicians by how they looked and acted. Another factor was the collapse of the traditional two-party system and unions. Once voters stopped taking their cues from party and labor bosses, they were largely on their own as they sorted through the complicated choices they face.

That may be true, but I think we can easily, and very specifically, determine (with at least one notable exception) what the central problem is: 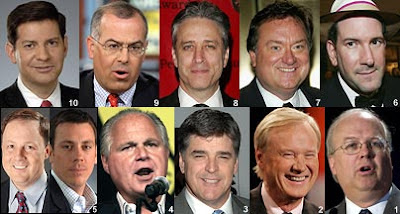 The example he cites to make his point about public ignorance is a good one. Has anyone asked the media recently why they think a large majority of the public believed that Saddam Hussein and Al Qaeda were in cahoots when those of us who were paying close attention (which includes, presumably, the press) could easily tell that the administration was using innuendo and clever phrasing to convince people of this? Have any of them explained where they went wrong?

While it was happening, there were some who were trying to sort it out. Here's Bruce Morton of CNN in march of 2003:

Bottom line: U.S. officials claim there is evidence of an al Qaeda-Iraq connection -- but there is no "smoking gun."

New York Times columnist Paul Krugman said he thinks the TV networks' news coverage has helped sell the Saddam-al Qaeda connection. "Suddenly, it was Osama, Osama, Osama ... Saddam, Saddam, Saddam ... and the networks -- the broadcast media -- simply picked that up [and] transferred our feelings of alarm and anger from one villain to another."

In a February CNN-Time poll, 76 percent of those surveyed felt Saddam provides assistance to al Qaeda. Another poll released in February asked, "Was Saddam Hussein personally involved in the September 11 attacks?" Although it is a claim the Bush administration has never made and for which there is no evidence, 72 percent said it was either very or somewhat likely.

That seems pretty straightforward to me. But it doesn't explain why the public believed what it believed.

Morton was certainly right that people easily transferred their fear and anger at one enemy onto another without a whole lot of reflection. That's a fairly common occurrence. Free floating anger and fear looks for something tangible to latch on to. And then there was "the only good arab is a dead arab" concept, some version of which never seems to go out of style. There's also little doubt that on some level a lot of people just wanted to have a "real war" to show that you can't mess with Uncle Sam.

But there was something more to it than that. 72% believed that there was a connection between Al Qaeda and Saddam in March of 2003. And I would submit it was because people were watching a whole lot of gasbags --- including, by the way a whole lot of bought and paid for ex-Generals --- who gave them that impression. At the very least they failed to properly question the administration's rhetoric or show the kind of skepticism that could have led people to question these assumptions. It was an intrinsic part of the administration's plan for the invasion to imply that it was in retaliation for 9/11, even if they didn't explicitly make that case. And the news media willingly helped them do it.

This is the best that "media critic" Howard Kurtz could do at the time:

"I think the administration has used the media very successfully to make the case against Saddam as the chief evildoer of the moment, but I still think there's an awful lot of uneasiness in America over this war," said Howard Kurtz, Washington Post media critic and co-host of CNN's "Reliable Sources."

There were a few exceptions, one extremely important one noted earlier in the Morton piece, who got it right from the beginning:

"They use essentially the kind of logos, martial music, and so on that we saw after Gulf War One had started," Krugman said. "So, from the point of view of the American public, Iraq is already the enemy; we're already at war."

Needless to say, it was very, very shrill of him to point that out.

Update: I didn't create the montage of the pundits and gasbags. It came from a story which named the top 50 pundits in America. This was 1-10, (starting with 10.) When I wrote "notable exception" I was, of course, referring to Jon Stewart.