Clinging To Their Reality 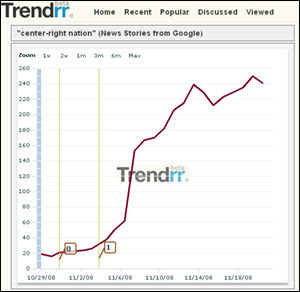 When I wrote my first column about the "center-right nation" and subsequently launched the "Center-Right Nation Watch" series on this blog I predicted that the news media would actually increase its usage of this term after Obama won. I did a Lexis-Nexis search of the term, and was the first to note the trend and make the prediction that "if Obama wins, expect more frantic talk from the fringe about how electing a black man billed as an Islamic Karl Marx obviously means our country is more conservative than ever."

Feeling like I was out on a limb (and remember, this was almost 2 weeks before a group of major progressive pundits belatedly started writing about the trend), I asked a friend out here in Denver who works with a company called Trendrr to officially track whether my prediction was right - and you can see from the results above, it was - more so than I ever expected.

As the graph shows, the use of the exact term "center-right nation" spiked immediately after election day (point "0" is the day my column published, point "1" is election day).

Meanwhile back on planet earth:

I don't know if the term "center-right" just spontaneously burst forth from the media after the election in a whiplash reaction to the shocking possibility that the American people might have voted for something other than mushy, faux provincial, conservatism. Perhaps it was a sort of mass delusion. But I suspect it was something a little bit more conscious than that, don't you?

This has actually been an article of faith among the gasbags for a very long time, it's just that until recently, what they proclaimed (without qualification) was that this was a "conservative country." The election of a Democrat with a popular mandate required them to change their rhetoric. But it hasn't changed their belief.

It is easy—for some, even tempting—to detect the dawn of a new progressive era in the autumn of Barack Obama's campaign for the presidency ... But history, as John Adams once said of facts, is a stubborn thing, and it tells us that Democratic presidents from FDR to JFK to LBJ to Carter to Clinton usually wind up moving farther right than they thought they ever would, or they pay for their continued liberalism at the polls. Should Obama win, he will have to govern a nation that is more instinctively conservative than it is liberal—a perennial reality that past Democratic presidents have ignored at their peril. A party founded by Andrew Jackson on the principle that "the majority is to govern" has long found itself flummoxed by the failure of that majority to see the virtues of the Democrats and the vices of the Republicans.

He goes on to cherry pick facts about Democratic presidents to show that they were all failures --- even Roosevelt!

This is an article of faith among the political establishment. In fact, it's one of the greatest successes of the conservative movement to persuade these villagers that Democratic presidents are doomed to failure before they even begin.

So, this "center-right" trope is just their way of preserving their belief system in the face of a repudiation by the people. It's not a problem in and of itself, except to those of us who actually identify as liberals and progressives and feel that it's useful to take political credit for policies that actually help humans. The problem is that Democrats take them seriously.