The good news is that this country elected an African American Democrat. The bad news is that it seems to have inspired an uptick in threats and violent rhetoric:

Threats against a new president historically spike right after an election, but from Maine to Idaho law enforcement officials are seeing more against Barack Obama than ever before. The Secret Service would not comment or provide the number of cases they are investigating. But since the Nov. 4 election, law enforcement officials have seen more potentially threatening writings, Internet postings and other activity directed at Obama than has been seen with any past president-elect, said officials aware of the situation who spoke on condition of anonymity because the issue of a president's security is so sensitive.

Earlier this week, the Secret Service looked into the case of a sign posted on a tree in Vay, Idaho, with Obama's name and the offer of a "free public hanging." In North Carolina, civil rights officials complained of threatening racist graffiti targeting Obama found in a tunnel near the North Carolina State University campus.

And in a Maine convenience store, an Associated Press reporter saw a sign inviting customers to join a betting pool on when Obama might fall victim to an assassin. The sign solicited $1 entries into "The Osama Obama Shotgun Pool," saying the money would go to the person picking the date closest to when Obama was attacked. "Let's hope we have a winner," said the sign, since taken down.

In the security world, anything "new" can trigger hostility, said Joseph Funk, a former Secret Service agent-turned security consultant who oversaw a private protection detail for Obama before the Secret Service began guarding the candidate in early 2007.

Obama, of course, will be the country's first black president, and Funk said that new element, not just race itself, is probably responsible for a spike in anti-Obama postings and activity. "Anytime you're going to have something that's new, you're going to have increased chatter," he said.

The Secret Service also has cautioned the public not to assume that any threats against Obama are due to racism.

That's true. They may be threats because he is a socialist, muslim, terrorist -- or just because he's allegedly "the most liberal senator." Republicans have made it quite clear what should be done with Americans who they deem to be such:

[Quoting from an AP report] "... The aid group Christian Peacemaker Teams has confirmed that four of its members were taken hostage on Saturday...."

[P]art of me that likes this. And some of you might say, "Rush, that's horrible. Peace activists taken hostage." Well, here's why I like it. I like any time a bunch of leftist feel-good hand-wringers are shown reality.

While praising the efforts of American troops in Iraq and Afghanistan, Gibbons accused liberals, movie stars and song makers of "trying to divide this country."

"I say we tell those liberal, tree-hugging, Birkenstock-wearing, hippie, tie-dyed liberals to go make their movies and their music and whine somewhere else," he told the crowd, according to the Elko Daily Free Press.

He then said it was "too damn bad we didn't buy them a ticket" to become human shields in Iraq.

His comments came a week after he apologized for calling those who oppose corporate donations for President Bush's inaugural parties "communists."

Miller is not alone, though some are more sanguine when it comes to evaluating the roster of contenders. Here's a note I got recently from a friend and former Delta Force member, who has been observing American politics from the trenches: "These bastards like Clark and Kerry and that incipient ass, Dean, and Gephardt and Kucinich and that absolute mental midget Sharpton, race baiter, should all be lined up and shot."

In the post those three were randomly from, Dave Niewert cataloged dozens of examples of eliminationist rhetoric during the Bush administration through 2007. Think about that. Even when they were riding high in popularity and in charge of the entire government, many of them were angry and violent in their rhetoric toward liberals. Now that they have destroyed the economy and are completely out of power and as popular as dirt, it's only natural that people who think like this are going to be potentially dangerous. It's not like they haven't signaled their intentions. 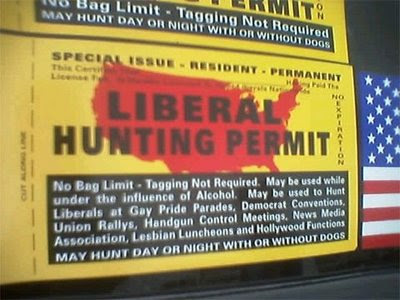 Reports of incidents such as those across the country are dampening the glow of racial progress and harmony that bloomed after the election of Democrat Barack Obama, an African American, to the presidency.

From California to Maine, police have documented a range of incidents, including vandalism, threats and at least one physical attack. There have been "hundreds" of incidents since the election, many more than usual, said Mark Potok, director of the Intelligence Project at the Southern Poverty Law Center, which monitors hate crimes.

In Snellville, Ga., Denene Millner said that a day after the election, a boy on a school bus told her 9-year-old daughter that he hoped "Obama gets assassinated." That night, Millner said, someone trashed her sister-in-law's front lawn, mangled the Obama lawn signs and left two pizza boxes filled with human feces outside the front door.

"It definitely makes you look a little different at the people who you live with," said Millner, who is black. "And makes you wonder what they're capable of and what they're really thinking."

Potok, who is white, said he thinks there is "a large subset of white people in this country who feel that they are losing everything they know, that the country their forefathers built has somehow been stolen from them."

Grant Griffin, a 46-year-old Georgia native who is white, expressed similar sentiments. "I believe our nation is ruined and has been for several decades, and the election of Obama is merely the culmination of the change," Griffin said.