It seems that the conservative airbrushers have decided that poor George W. Bush's fantastically successful presidency was derailed by an act of God. Yes, that's right. Until Hurricane Katrina, Bush was headed to Mt Rushmore. It's just so darned unfair.

That's ridiculous, of course. The fact is that his support, even after 9/11, was never more than an inch deep, despite the media's insistence that he was the second coming of Alexander the Great. There was that little matter of a catastrophic terrorist attack, the looting of Iraq, the missing weapons of mass destruction, Enron and the fact that his allegedly triumphant reelection was another squeaker that relied once more on Republican shennanigans. Those things were in the mix long before Katrina.It was the press, more than anything, that propped him up, calling him an "enormously popular president" long after his numbers had fallen back to earth.

But in my opinion, there was a specific turning point, and it wasn't the hurricane. As John Amato reminded us the other day, the real moment of realization that Bush and the GOP majority were inmates running the asylum, was this: 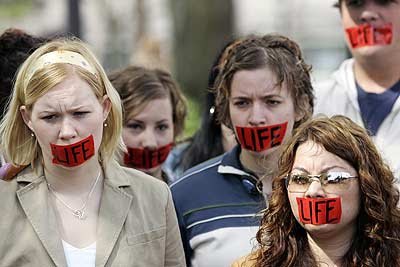 Tom Delay and his crew were so drunk with power that they even threatened the Republican judges involved in making the right decision. (Above video from the C&L vault in 2005)

Delay: Mrs. Schiavo’s death is a moral poverty and a legal tragedy. This loss happened because our legal system did not protect the people who need protection most, and that will change. The time will come for the men responsible for this to answer for their behavior, but not today. Today we grieve, we pray, and we hope to God this fate never befalls another. Our thoughts and prayers are with the Schindlers and with Terri Schiavo’s friends in this time of deep sorrow.

John McCain even got into the act. And they even played the Randle Terry card. America was horrified. And so the conservative movement began to crumble because the media couldn't waffle their way through it. Bill Frist's political career never survived his video tape diagnosis.

"I question it based on a review of the video footage which I spent an hour or so looking at last night in my office," he said in a lengthy speech in which he quoted medical texts and standards. "She certainly seems to respond to visual stimuli."

His comments raised eyebrows in medical and political circles alike. It is not every day that a high-profile physician relies on family videotapes to challenge the diagnosis of doctors who examined a severely brain-damaged patient in person.

When you have Sean Hannity camped out in front of Terry's hospice, well, it was truly a disturbing time indeed.

Terri Schiavo may well die. No good will come of it. Those who are half in love with death will only become more red-fanged and ravenous.

And those who are still learning--our children--oh, what terrible lessons they're learning. What terrible stories are shaping them. They're witnessing the Schiavo drama on television and hearing it on radio. They are seeing a society--their society, their people--on the verge of famously accepting, even embracing, the idea that a damaged life is a throwaway life.

Our children have been reared in the age of abortion, and are coming of age in a time when seemingly respectable people are enthusiastic for euthanasia. It cannot be good for our children, and the world they will make, that they are given this new lesson that human life is not precious, not touched by the divine, not of infinite value.

Once you "know" that--that human life is not so special after all--then everything is possible, and none of it is good. When a society comes to believe that human life is not inherently worth living, it is a slippery slope to the gas chamber. You wind up on a low road that twists past Columbine and leads toward Auschwitz. Today that road runs through Pinellas Park, Fla.

Yep, Auschwitz. But it wasn't just the wingnuts. This was one of those events in which the faux provincialism of the village was on display for all to see and, as usual, they were completely out out of step with the rest of the country.

Joe Klein complained that Democrats were relying too much on the law and that Republicans relied too little. What would be "juuuust right" would be if people could vote on whether someone has a right to die or if a woman should have an abortion. It would be "messy" but democratic. He wrote:

Democrats would be wise to stow their satisfaction and give careful consideration to what thoughtful conservatives are saying about the role of the judiciary in our public life because the issue is about to get a lot more contentious.

I asked at the time:

Or maybe it's this thoughtful conservative who heads the Coalition For A Fair Judiciary. Here's what she thoughtfully had to say today, (via Sam Rosenfeld on TAPPED):

My job is stand in the breach between the left and the president’s judicial nominations . . . You know who they are. You’ve seen them. The pro-abortion fanatics and the radical feminists, the atheists who file lawsuits attacking the pledge of allegiance and the ten commandments, the environmentalist tree-hugging animal-rights extremists, the one-world globalists who worship at the altar of the United Nations and international law, the militant homosexuals and the anti-military hippie pieceniks, the racial agitators who believe we are all created equal but some are a little more equal than others, the union bosses and the socialists posing as journalists and college professors, the government bureaucrats and the tax-and-spend junkies, the Hollywood elitists, the air-headed actors and singers who think that we actually care what they think, the pornographers who fund the leftists and who won’t be happy until every Bible in every child’s hands is replaced with the latest copy of Hustler magazine, and of course the gun-grabbing trial lawyers and their willing accomplices in the United States Senate who won’t be happy until they disarm every last citizen down to the last bee bee and paintball gun.

That moment was an important turning point in the conservative movement. The entire country watched as far right radicals like that pulled the strings of the entire Republican party and they saw the entire decadent political establishment become enraptured by radical, pro-life kitsch. If the saga of Patty Hearst and the SLA was the moment when the country decided the New Left had turned into a creepy, surreal sideshow, the sight of those girls with duct tape over their mouths while the crimson faced Sean Hannity shook his fist and shouted about the "culture of death" was the moment for the right.

Something shifted then and the image of Bush with the bullhorn was finally completely supplanted by the picture of Bush slinking back into town under cover of darkness to sign a law which put the full force of the federal government into a complicated and deeply personal dilemma which millions of average Americans confronted every day. The conservative movement showed its true colors over Terry Schiavo and the country got a clear view of what social conservatism would mean in their own lives. They didn't like what they saw.

Katrina happened just five months late and the woman who claimed that liberals were half in love with death incoherently shrieked from the pages of the Wall Street Journal that looters should be shot on sight while a glib and indifferent president strummed a guitar as a great American city drowned. By that time, the people were well acquainted with the methods and priorities of the people who were running the country.

Oh, and by the way, America's pastor weighed in on the Schiavo situation by insinuating that her husband had tried to kill her and wanted to finish her off before she could wake up and finger him:

MATTHEWS: There‘s no insurance money. The malpractice money is gone now. That‘s behind us. There‘s nothing ahead of him in terms of money. I mean, he is certainly not going to write a book about this. That wouldn‘t sell.

MATTHEWS: I don‘t know if anybody‘s book will sell in this case, because it takes six months for a book to come out. And people won‘t be following the case anymore.

MATTHEWS: So why is he doing this, do you think?

There‘s 1,000 reasons could you speculate. What if she came back out of the—out of this state and had something to say that he didn't want said?

Once again I'm struck by how politically and morally inspiring it is to reach out to a great spiritual healer like Rick Warren.


As dday mentioned the other day, the right is planning to bring up the Schiavo mess in the confirmation hearings. If they want to remind the country of that circus, it's their funeral. As one who is half in love with death, I say bring it on.