Would You Support A Progressive Challenger To Specter?

I confess that I'm more than a little bit irked that the Democratic Party has already pledged to support Specter against a primary challenger. It's fundamentally undemocratic, not to mention dumb. Specter now has carte blanche to remain an incoherent obstructionist for the next two years when they could have at least let us pull him to the left with a primary challenge. It's not like he would lose to Pat Santorum ... er, Toomey, if we had succeeded. The man is a hard right Teabag Republican and Arlen would beat him the general anyway. Of course, there's always the possibility that Specter would lose to an orthodox Dem in the primary ... who would also beat the teabagger in the primary.

Sadly, one is inclined to conclude they want to keep a Republican within the party on fiscal issues the way Lieberman is a Republican within the party (sort of) on foreign policy. In other words, a powerful Democratic voice against liberal policies so that David Broder won't get the vapors and the DFHs won't get all crazy and try to put some liberals on the court or pass pro-labor legislation. Sure looks that way.

It's not easy to go up against the Democratic Party leadership,but there's no reason someone couldn't do it anyway. Primaries are supposed to be the way the rank and file have a voice in the nominating process and just because the leadership insists on making back room deals doesn't mean the voters have to adhere to them.

Adam Green has an idea about where to start: 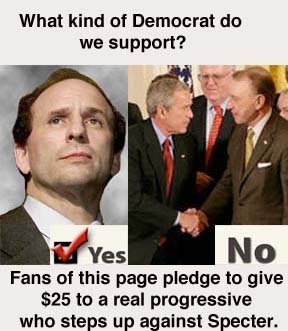 On the very day Arlen Specter became a Democrat, he lamented that not enough right-wing Bush judges got confirmed, he opposed workers' right to organize, and he compared himself to Joe Lieberman. The DSCC and Pennsylvania Democratic Party will be supporting Specter in the primary.

If there is a potential progressive challenger to Arlen Specter in Pennsylvania, they are probably scratching their head right now asking, "Would I have any chance at all if I ran, or is the fix in?"

What can progressives to do create an environment where this person feels they can run?

Legally, we can't put money in a pot for a fictional candidate. But we can pledge now that if a real progressive steps up, we'll get their back.

Sounds like a good idea to me. I hate it when the poohbahs arrogantly foreclose the primary process, especially when there's little chance of a Republican victory. I really hate it when it's done behind closed doors to shut out liberals. If an actual Democrat out there wants to give it a try I think they deserve some support.