On Fits And Starts

The Politico has written a somewhat unenlightening article about Alan Grayson's floor speech, but I can't help but be a little bit tickled by a quote of his, which is also used in the headline of the piece. He said:

“We cannot run this institution on the basis of Republican hissy fits.

The title is "The pros and cons of hissy fits."

I'm please by this because I think I may be the one who coined that particular phrase, or at the very least popularized it. In any case, I have characterized these phony Republican outrage fests that way for many years on this blog and wrote a piece explaining it called "the Art of the Hissy Fit" for Campaign for America's Future blog, (reprinted here by Alternet)

The Art of the Hissy Fit

I first noticed the right's successful use of phony sanctimony and faux outrage back in the 90's when well-known conservative players like Gingrich and Livingston pretended to be offended at the president's extramarital affair and were repeatedly and tiresomely "upset" about fund-raising practices they all practiced themselves. The idea of these powerful and corrupt adulterers being personally upset by White House coffees and naughty sexual behavior was laughable.

But they did it, oh how they did it, and it often succeeded in changing the dialogue and titillating the media into a frenzy of breathless tabloid coverage.

In fact, they became so good at the tactic that they now rely on it as their first choice to control the political dialogue when it becomes uncomfortable and put the Democrats on the defensive whenever they are winning the day. Perhaps the best example during the Bush years would be the completely cynical and over-the-top reaction to Senator Paul Wellstone's memorial rally in 2002 in the last couple of weeks leading up to the election.

With the exception of the bizarre Jesse Ventura, those in attendance, including the Republicans, were non-plussed by the nature of the event at the time. It was not, as the chatterers insisted, a funeral, but rather more like an Irish wake for Wellstone supporters -- a celebration of Wellstone's life, which included, naturally, politics. (He died campaigning, after all.) But Vin Weber, one of the Republican party's most sophisticated operatives, immediately saw the opportunity for a faux outrage fest that was more successful than even he could have ever dreamed.

By the time they were through, the Democrats were prostrating themselves at the feet of anyone who would listen, begging for forgiveness for something they didn't do, just to stop the shrieking. The Republicans could barely keep the smirks off their faces as they sternly lectured the Democrats on how to properly honor the dead -- the same Republicans who had relentlessly tortured poor Vince Foster's family for years.

It's an excellent technique and one they continue to employ with great success, most recently with the entirely fake Move-On and Pete Stark "controversies." (The Democrats try their own versions but rarely achieve the kind of full blown hissy fit the Republicans can conjure with a mere blast fax to Drudge and their talk radio minions.)

But it's about more than simple political distraction or savvy public relations. It's actually a very well developed form of social control called Ritual Defamation (or Ritual Humiliation) as this well trafficked internet article defines it:

Defamation is the destruction or attempted destruction of the reputation, status, character or standing in the community of a person or group of persons by unfair, wrongful, or malicious speech or publication. For the purposes of this essay, the central element is defamation in retaliation for the real or imagined attitudes, opinions or beliefs of the victim, with the intention of silencing or neutralizing his or her influence, and/or making an example of them so as to discourage similar independence and "insensitivity" or non-observance of taboos. It is different in nature and degree from simple criticism or disagreement in that it is aggressive, organized and skillfully applied, often by an organization or representative of a special interest group, and in that it consists of several characteristic elements.

The article goes on to lay out several defining characteristics of ritual defamation such as "the method of attack in a ritual defamation is to assail the character of the victim, and never to offer more than a perfunctory challenge to the particular attitudes, opinions or beliefs expressed or implied. Character assassination is its primary tool." Perhaps its most intriguing insight is this:

The power of ritual defamation lies entirely in its capacity to intimidate and terrorize. It embraces some elements of primitive superstitious belief, as in a "curse" or "hex." It plays into the subconscious fear most people have of being abandoned or rejected by the tribe or by society and being cut off from social and psychological support systems.

In a political context this translates to a fear by liberal politicians that they will be rejected by the American people -- and a subconscious dulling of passion and inspiration in the mistaken belief that they can spare themselves further humiliation if only they control their rhetoric. The social order these fearsome conservative rituals pretend to "protect," however, are not those of the nation at large, but rather the conservative political establishment which is perhaps best exemplified by this famous article about how Washington perceived the Lewinsky scandal. The "scandal" is moved into the national conversation through the political media which has its own uses for such entertaining spectacles and expends a great deal of energy promoting these shaming exercises for commercial purposes.

The political cost to progressives and liberals for their inability to properly deal with this tactic is greater than they realize. Just as Newt Gingrich was not truly offended by Bill Clinton's behavior (which mirrored his own) neither were conservative congressmen and Rush Limbaugh truly upset by the Move On ad -- and everyone knew it, which was the point. It is a potent demonstration of pure power to force others to insincerely condemn or apologize for something, particularly when the person who is forcing it is also insincerely outraged. For a political party that suffers from a reputation for weakness, it is extremely damaging to be so publicly cowed over and over again. It separates them from their most ardent supporters and makes them appear guilty and unprincipled to the public at large.

Ritual defamation and humiliation are designed to make the group feel contempt for the victim and over time it's extremely hard to resist feeling it when the victims fail to stand up for themselves.

There is the possibility that the Republicans will overplay this particular gambit. Their exposure over the past few years for incompetence, immorality and corruption, both personal and institutional, makes them extremely imperfect messengers for sanctimony, faux or otherwise. But they are still effectively wielding the flag, (or at least the Democratic congress is allowing them to) and until liberals and progressives find a way to thwart this successful tactic, it will continue. At this point the conservatives have little else.

What do you suppose today's enforcers of proper decorum would say to this?

Americans too often teach their children to despise those who hold unpopular opinions. We teach them to regard as traitors, and hold in aversion and contempt, such as do not shout with the crowd, and so here in our democracy we are cheering a thing which of all things is most foreign to it and out of place - the delivery of our political conscience into somebody else's keeping. This is patriotism on the Russian plan. -- Mark Twain

At the time I wrote it, I had little hope that we would ever be able to end this silly practice because the Democrats both capitulated to the GOP's smug sanctimonious caterwauling and refused to turn the practice back on them. But I think Grayson may have shown the way. It takes guts and it takes being willing to have Gloria "Cokie" Borger tut-tut you like you are an errant child, but if you are willing to go right at them and then refuse to back down, the Republican propensity to call for the smelling salts whenever the Democrats do the same things the Republicans do might just die out. It's the first sign I've seen that it might happen.

I couldn't be prouder that Alan Grayson used the term, which I think is appropriately disdainful of the practice. If he is showing Democrats how to beat back these destructive faux outrage fests, he will have done a service that is as significant as anything else they've done:

Nancy Pelosi is shrugging off GOP calls for a mea culpa from Alan "they want you to die quickly' Grayson.

"We have to have a debate that is not distracted from... Apparently Republicans are holding Democrats to a higher level than they are holding their own members," she said, referring to floor comments by some Republicans who have said Democratic health care reforms would lead to higher deaths among seniors.

"There's no more reason for Mr. Grayson to apologize... If anybody’s going to apologize everybody should apologize," Pelosi said at her weekly press conference. 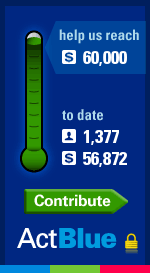 If you haven't thanked him yet, you can click the thermometer above and send him a little token of your gratitude. As you can see, those tokens are adding up.

Update: To be clear, I didn't mean to suggest that I invested the actual phrase "hissy fit." Obviously, I didn't. I know many of you think I am mentally deficient bordering on catatonically dumb, but really, I'm not quite that vacant.

When I use the phrase "Republican Hissy Fit" I'm referring to a particular political tactic that was not invented by them, to be sure, but was perfected during the past couple of decades. I don't think I'd ever heard that phrase used before in that context, but if there are references to "republican hissy fits" to describe this tactic that pre-dates the blogosphere I'm happy to apologize for taking credit for populoarizing it.