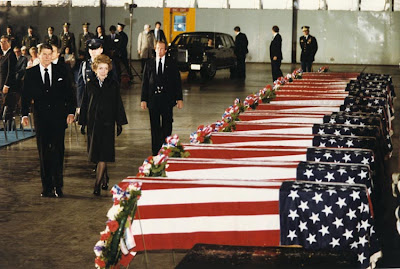 Reagan not only had the nerve to be photographed with the dead. He announced it in a radio address.

In a few hours I’ll undertake one of the saddest journeys of my Presidency. I’ll be going to Andrews Air Force Base to meet one of our Air Force planes bringing home 16 Americans who died this week in the terrorist attack on the United States Embassy in Beirut.

And you'll notice that he even brought Nancy with him.

This is idiotic. Presidents often greeted the dead soldiers until Bush senior was shown on a split screen yukking it up while coffins were shown coming in at Dover. Then the whole thing became a political calculation. Clinton was photographed at Dover greeting the coffins of civilians killed in terrorist attacks and accidents rather than military. (Of course he didn't have any soldiers killed in combat during his term.) Bush didn't bother to go at all and they banned all photography of the returning coffins during his term purely for political reasons. They didn't want the citizens seeing how many dead bodies there were.

Any discussion that there's something untoward in the President greeting dead soldiers is wingnut revisionist crap. Kings and leaders have been doing this since time began. It's a sign of respect for the fallen and they do it publicly as gesture on behalf of the people . That these so-called patriots think there's now something wrong with that tells you everything you need to know about their sincerity

Why do they hate the troops so much?