This piece by Dave Roberts gets to the nub of our ongoing national problem with governance and it's a biggie: the Senate and its supermajority rules:

What’s that dysfunction? It’s simple: a supermajority requirement coupled with an extreme, unified minority. Everything else—and I mean pretty much every lamentable feature of American politics —flows out of that. Rich Yeselson puts it in pungent terms: “We are living through the Californiafication of America—a country in which the combination of a determined minority and a procedural supermajority legislative requirement makes it impossible to rationally address public policy challenges.”

Yes, this is a discussion about congressional procedure, which conventional wisdom says will bore everyone. But it’s time you got un-bored, and quick, because nothing else you care about is going to improve until this does. read on ...

He goes on to show, as we have done many times here, that the Republicans are using the filibuster far, far more often than it ever has in the past. It's simply astonishing, as these charts show: 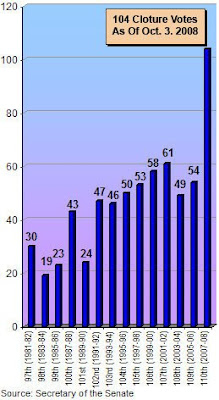 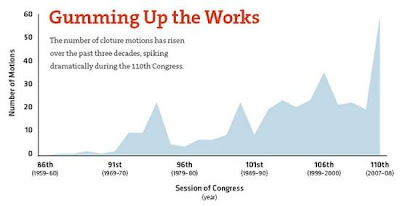 This is the result of the full realignment of the parties. The American system has essentially become a two party parliamentary system. (This is why some of us were nearly apoplectic at the idea that Democrats we promising a new era of comity and bipartisanship at a time when the structural foundation of our politics made such a thing nearly impossible.)

Roberts argues for abolishing the filibuster and I'm certainly all for that. I hate all of those anachronistic aristocratic prerogatives of white, male land ownership and I'd be happy to see the electoral college --- and the Senate itself, frankly --- go right along with it. Our system of government is unwieldy and bizarre and I'd be happy to see us have a real parliamentary system with multiple parties.

Unfortunately, I think we have a far better chance of reverting to full blown feudalism. I doubt very, very seriously the two parties are going to agree to abolish the filibuster. The Democrats may use it less ruthlessly when they are in the minority but they want it in the tool box. As long as Republicans are in the minority they will fight to the death to keep it and as Roberts lays out, it takes some of their votes to change it.

So, I'm skeptical about the prospects of eliminating the filibuster. But there is one thing that can be done: the Democrats can get over this nostalgia for the good old days when Democrats and Republicans all slept together in one big cozy pile and start acting like a real political party.

The argument for abolition of the filibuster falls apart when you see that the Dems have the 60 votes and --- it doesn't make any difference. And that's because there is always some pampered little prince or princess who thinks he or she should be running everything and they will hold up the process regardless. That 50th Senator for the vote would be as hard to get as the 60th for the filibuster unless the Democratic party starts to require some partisan loyalty.

In the days when legislation was cobbled together on a bipartisan basis, you didn't want too much discipline or you couldn't get the other side to cross lines when you needed them. But the realignment has solidified the partisan divide on the basis of ideology, philosophy and region. The Republicans have adapted already and understand that their job is to obstruct when in the minority and steam roll when in the majority. The Democrats are still living in the past.

We are a politically polarized country with very different views of how to govern this country. We have regular elections to determine if people are happy with what the majority party is doing. That system will work just fine if only the politicians will enact their agendas and then let the country ratify it or reject it. I don't see what's so wrong with that. It sounds like representative democracy to me.

This fetish for bipartisanship seems more and more like a social construct to allow the ruling class to live happily together. As a citizen, that really isn't my concern. I think we should expect the parties to fight these issues out on the merits rather than live with gridlock and torpor where the only ones who ever prevail are the lobbyists who grease the palms of the politicians of both parties.