So here’s the plan. On Tuesday, December 15 at 8:45 AM thousands of us will meet in Washington, DC at the fountain in Upper Senate Park. From there we will march to the Senate offices, go inside, and demonstrate our opposition to the government takeover of health care. We call this plan “Government Waiting Rooms”. The intention is to go inside the Senate offices and hallways, and play out the role of patients waiting for treatment in government controlled medical facilities. As the day goes on some of us will pretend to die from our untreated illnesses and collapse on the floor. Many of us plan to stay there until they force us to leave. A backup location for this demonstration will be announced if they block us from entering the offices.

We need as many of you as possible to be there to make our point loudly and clearly. Please make plans to attend. We know it’s a sacrifice to do this right before Christmas. But throughout history American Patriots have made far greater sacrifices than this to protect our liberty. Now the burden (and the honor) falls on us.

Of course, they don't actually have to stage some demonstration of the horrors of health care rationing. We have examples of exactly that happening in real life right this minute. Here's one in Kansas City:

More than 1,600 volunteers are helping with the Kansas City clinic, including more than 100 doctors and nurse practitioners. People seeking free health care waited in a lobby and then moved in groups up an escalator to the main hall. After checking in, they sat in a waiting area until their numbers were called:

• A 24-year-old college student who had been dropped by her mother’s insurance.

• A factory worker laid off in August, worried about his blood pressure and the lingering effects of an injury.

• A part-time bartender with a history of health problems and no health insurance.

The bartender, Kelly Barnhart, 37, of Kansas City, Kan., had strokes in 1991 and 2003 and has been diagnosed with osteoporosis. She hasn’t been to a doctor’s office in six years; she usually goes to hospital emergency rooms for care. She should be taking medications but says she can’t afford them. “I want to get checked because I haven’t for so long,” said Barnhart, who walked in without an appointment. “I’m worried about a stroke coming back. I don’t want another one.”

Last night, Olbermann interviewed NAFC executive director Nicole Lamoureux, who pointed out that 83 percent of her patients are employed. She encouraged “every member of Congress to come to our free clinics” to witness the health care crisis first hand. Watch it:

As ThinkProgress has covered before, these free clinics have appeared all over the country. Last month, 1,500 Arkansans lined up in a single day for free care at a clinic in Little Rock, and thousands of Texans attended a free clinic in Texas last September.

They aren't the only ones doing this work. Here's a post of mine from last summer: 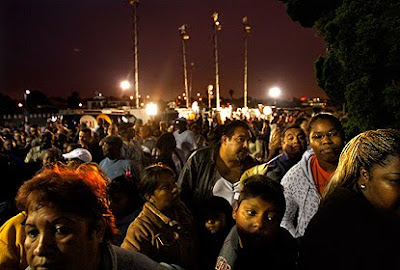 Hundreds of people were already lining up to receive free health care checks at the the Forum in Inglewood.

The eight-day healthcare event will run from 5:30 a.m to 6 p.m. and is sponsored by Remote Area Medical, a charity that in the past has staged clinics in rural sections of the United States.

People started arriving before 3. Many said they didn't have health insurance and saw this as an opportunity to be checked out. Organizers placed them in stadium seats outside the Forum, and some said they waited for hours to get medical treatment.

This is the same group that does the rural health care program that radicalized former insurance flack Wendell Potter. They work in major urban areas as well. If things don't change, in a couple of years they'll be needed in the suburbs as well.

If the uninsured want health care they can (probably) get it by staying up all night and waiting in the street outside a sports stadium once a year. What's the problem

Maybe these teabaggers think that those people don't count and that somehow they'll personally all be spared from these circumstances if they lose their jobs or get sick. I hope for their sake it's true. But the truth is that among those who are staging this little stunt, it's extremely likely that a percentage of them are going to be participating in this rationing in real life at some point. And there is no way of predicting which ones it will happen to. Talk about cutting off your nose to spite your face...