Rep. Peter King (R-N.Y.) is complaining that he didn't like the look on the DHS secretary's face.

In the wake of the attempted bombing of a plane bound for Detroit, Rep. Peter King (NY-R) criticized Homeland Security Secretary Janet Napolitano for appearing "bored." [...]

"Finally, Janet Napolitano comes out and the first thing she said was everything worked well. And she seemed almost like she was bored to be there. There was no intensity. There was no show of emotion," he said.

That's what it's come to with today's Republican Party -- in the wake of an attempted terrorist attack, one of the first GOP responses is to blast the Homeland Security secretary for her tone and facial expressions. King wants her to be more "emotional."

That's right. This is how one properly reacts to news of a terrorist attack: 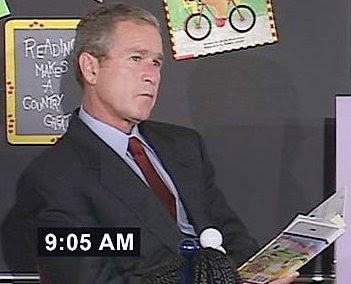 I was at a gathering earlier today with a lot of people who aren't political junkies. Across the board they were either barely aware of this failed terrorist attempt or handled the threat in stride, mostly complaining about airport delays if anything. The only people who are fouling their trousers over this story are the media and the Republican opportunists, all of whom seem to believe that each time some loser fails to set off a terrorist bomb, the president's primary function is to rush to the TV to provide "comfort" and then give everyone a rousing pep talk about how we're gonna get 'em dead or alive. (Then he can give them a bottle and put them to bed.)

They are currently working themselves into quite a frenzy over all this. But so far, I don't think the people are buying it.