There aren't enough hours in the day to follow the myriad Catholic sex and pervert scandals, but I would have thought that I would have heard about this one before now. How did I miss this doozy?

"Maciel was a sexual criminal of epic proportions who gained the trust of John Paul II and created a movement that is as close to a cult as anything we've seen in the church," said author Jason Berry, one of two reporters who broke the Maciel story in 1997 and who directed a 2008 documentary about the priest called "Vows of Silence."

The Vatican ordered a worldwide investigation into the Legion, founded in Mexico in 1941, last year. But its response to decades of allegations involving Maciel has been as slow and often reluctant as its reaction to the long-festering sex abuse scandals now erupting in Ireland, Germany, Austria and the Netherlands.

In 1997, nine former high-ranking seminarians accused Maciel, who died in 2008, of sexually abusing them when they were boys training for the priesthood. Last year, it was discovered Maciel had an illegitimate daughter born in 1986 in Spain. Two Mexican men who say they are Maciel's sons claim he also sexually abused them as children.

With a leader said to be a manipulative monster who built a shadowy but powerful organization for elite, wealthy Catholics with schools in 22 countries – and a tradition of grooming handsome, clean-cut priests who all wear their hair parted on the left and black double-breasted suits -- the Legion of Christ sounds straight out of a Dan Brown novel.

Read the whole thing. There's a lot more. But this one part I find particularly interesting:

Two of the most visible priests in America are Father Thomas Williams, a movie-star-handsome CBS News analyst, and Father Jonathan Morris, who is sometimes referred to as "Father Knows Best" on the Fox News Channel. They belong to the Legion of Christ but rarely identify themselves as such on camera.

Well now. Father Jonathan Morris is very familiar to me. Here's a picture of him: 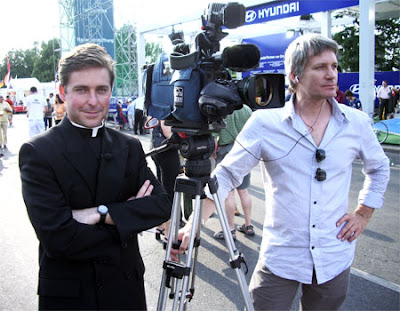 Here's an example of his priestly commentary:

As we predicted last week, President Obama is using moral arguments to push through congress at lightning speed his health care reform bill... [I]f there is one thing ethicists and moral theologians agree upon, it is that conditions and circumstances surrounding an ethical issue do matter, and that these indeed can change the moral value of the issue in question. For example, giving money to a poor man may usually be a good thing; but giving it to him when you know he is going to buy a gun and kill his family would be all together evil.


President Obama doesn't seem to be aware of any conditions or circumstances that may alter our "moral imperative" to pass his bill and to pass it right now.

We should be aware of many.

1) President Obama's argument that our choice is between a) his bill right now and b) no reform for another forty years is fallacious.

2) His refusal to answer basic questions about how we are going to pay for his bill (refusing to take off the table the massive surtax option while also refusing to say he plans on using it if he can) is not fair.

3) Independent budgetary analysts disagree with the President about what this reform bill will do to minimize overall government health expenditures (the president says we "can't afford" not to pass his bill) and about the impact of the 1 trillion dollar cost on other parts of our economy.

4) Under the proposed legislation individuals will be required to have health care coverage that meets minimum benefits standards. These standards will be established by the Obama administration. There is very good reason to believe these minimum benefits that health insurance companies must provide will include abortion on demand. Obama has said reproductive care is essential care, basic care" and Secretary of State Hillary Clinton has added, reproductive health includes access to abortion. Congressman Joe Pitts (PA) recently warned in a written statement that any individual who does not have a plan that meets the minimum benefit standards will be forced to pay a 2.5 percent tax penalty. And any employer who does not provide coverage that meets these standards will pay up to an 8 percent tax penalty,"

5) This week the president himself admitted he cannot guarantee tax money will not be used for abortions under his plan. Why can't he guarantee that? Because he wants it in his plan and will mandate it if he can.

6) Euthanasia is not explicitly excluded from the category of basic health care either. If it is not excluded, eventually it will be demanded, and we will pay for it.
For President Obama to continue to use moral arguments to demand immediate passage of his bill, without also putting to rest the conditions and circumstances I outline above, is ethically reprehensible and politically unacceptable.