The latest from Rumproast 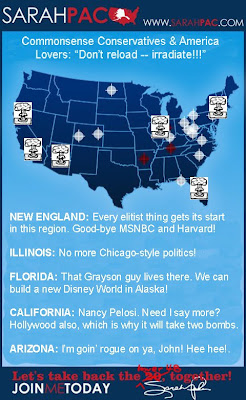 The Facebook post urged Palin supporters to consider the benefits of decimating certain sections of the country to achieve a return to founding values:

“With the most pro-abortion president in the history of the world ‘transforming’ our country into an socialist abortion-lovers’ paradise and installing abortion vending machines and death panels on every corner, our country is being ‘transformed’ in unwanted ways. It’s time for Commonsense Conservatives & lovers of America to take a stand.

Now some might say exploding nuclear bombs on non-pro-America parts of America is a drastic solution. I say you can’t make a pro-America omelet without literally breaking some anti-American eggs and frying up some elitist bacon.”

While many reacted to Palin’s proposal with shock and horror, others seemed nonplussed:

“I don’t think it’s particularly helpful,” President Obama said. “But we’ll continue to reach across the aisle and try to work with Republicans in a bipartisan way. That’s clearly what the American people expect.”

Others expressed support and even enthusiasm for Palin’s “Sarahpocalypse” plan:

“This will be better than the little starbursts,” said Rich Lowry, National Review Online editor. “I’m sure I won’t be the only male in America who will sit up a little straighter on the couch when viewing Sarah’s radiant glow.”

News analysts were divided about the possible effect of simultaneous nuclear detonations on Democratic strongholds: read on

This is clearly what the founders would have wanted.