Anchors Away --- teabag nativism rises to the surface


We've been waiting for this to bubble up:

A Phoenix news station (KPHO) is reporting that the state Senator behind Arizona’s new immigration law, Russell Pierce (R), does not intend on stopping at SB-1070. In e-mails obtained by the local CBS affiliate, Pearce said he intends to push for an “anchor baby” bill that would essentially overturn the 14th amendment by no longer granting citizenship to the children of undocumented immigrants born on U.S. soil. “Anchor babies” is a derogatory and “politically charged” term used to refer to the U.S. citizen children of undocumented parents. KPHO obtained a troubling email from one of Pierce’s constituents who is encouraging him to pursue the “anchor baby” legislation. KPHO reports:

One of the e-mails written by someone else but forwarded by Pearce reads: “If we are going to have an effect on the anchor baby racket, we need to target the mother. Call it sexist, but that’s the way nature made it. Men don’t drop anchor babies, illegal alien mothers do.” [...]

Pearce said his new idea is not only legal but constitutional. “It’s common sense,” Pearce said. “Again – you can’t break into someone’s country and then expect to be rewarded for that. You can’t do it.”

When Pearce was shown the e-mail referring to “anchor babies” that he forwarded, he said he didn’t find anything wrong with the language. “It’s somebody’s opinion…What they’re trying to say is it’s wrong. And I agree with them. It’s wrong,” said Pearce.

Howie wrote about how this issue was huge at the tea party rally he attended last summer here in LA.: 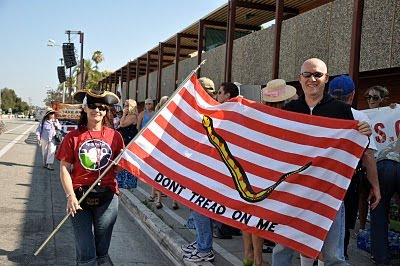 I'm not a social anthropologist, but I'm well aware that not all teabaggers are the same. I've never been to a tea party in the South or in the Midwest or the Northeast. But I did spend a whole day with the teabaggers of the L.A. area back in August and reported on it here (lots of pictures of me up close and live with actual teabaggers), here and here. What I noticed about the Southern California teabaggers-- and I was hanging out with them for hours before the event started and talking with every one of them I could-- was that in the end, no matter what confused issues they had foremost in their dim minds, they were all just a bunch of fearful, hate-filled racists. Really, every single one of them.

Every argument they couldn't defend ended in racial slurs about "anchor babies" and "illegals." No matter how the discussion began, no matter what the topic-- and this was a healthcare town hall-- it always ended in bigotry and their anti-Hispanic psychosis. Like I said, I never visited a tea party in Arkansas or Tennessee or Georgia. And it would only be a guess to say that they're not as obsessed about Hispanics and they might have another group at the bottom of their grievances. Or maybe it's just the Southern California teabaggers who are racist maniacs, and the ones in the South are just defenders of the constitutional order.

Early in the teabagger media cycle, before Fox had been able to market it fully and cross it over to the mainstream, Cincinnati was on the bandwagon. Poor Steve Dreihaus hardly knew what hit him when a horde of teabaggers descended on his town hall meeting. A friend who was there told me that Cincinnati is more like a Southern city than any other place in the Midwest, and that there were probably more people from Kentucky there than from Ohio. They were shouting the same canned slogans and bromides the well-organized teabaggers were in L.A., but they weren't concerned about Mexicans in Cincinnati. The President's skin color, on the other hand, and his Hawaiian birth and "Muslim faith," of course, bothered them greatly and became the default for any losing position in an argument.

I understand that we are not supposed to use the "R" word when talking about the tea partiers because, well, it's hurtful and unfair to people who have legitimate grievances. Except this "grievance" about anchor babies is made up in their heads and they are being nativist and racist by pushing it. Children of undocumented workers who are born in America are Americans. They speak English, they pay taxes, they are citizens like anyone else who was born of immigrant parents, which nearly all of us or our ancestors were. The idea that it's appropriate to punish American children (not one of whom asked to be born) for the fact that their mother gave birth to them in the United States without proper papers is disgusting and cruel. I don't know why I should respect that.

I'm also told that it's wrong to ridicule these people because it's wrong and besides, ridicule never works.

A huge part of the (very successful) conservative movement was based upon the ridicule and marginalization of American liberalism. It went on for year after year, decade into decade until people were so indoctrinated that liberals actually had to start calling themselves something else. The most important Republican campaign consultant of the era made a fetish of it. Indeed as the loathed vehicle for social change and destruction of traditional white male privilege, anti-liberalism is the main organizing principle for the conservative movement and now, the tea parties. That's why when you scratch the surface of their "small government" message, what you usually find is someone who doesn't like government because it is the institution which enforces the rights guaranteed under the constitution for people they despise.

I understand that people think ridicule makes it difficult to have a reasonable conversation. And if what you want is to make the tea partiers "understand" you, like politicians for instance, you probably shouldn't engage in it (although, as you can see, Ronald Reagan certainly didn't have any problem doing it.) But if you are involved in movement politics, as opposed to a specific legislative strategy or some kind of Machiavellian inside game, values, identity and tribalism are necessary organizing principles and that means the right wing should be treated with the only respect you should grant anyone who sees you as their enemy: you take them seriously and do not underestimate their hostility toward you or their strength and commitment to their cause. I certainly grant them that respect. Anyone who lived in the 20th century would be foolish not to. That's the best I can do.