Crippling delusion --- nobody should underestimate the extremism of Ran Paul

Here are a couple of fun facts on the Republican Party's probable Senate nominee from Kentucky. Like all right wing libertarians, property rights trump individual rights, and money is everything, so Ran Paul naturally doesn't believe in the Americans With Disabilities Act:

Part of Paul’s appeal has been his supposed support of individuals over large interests, like the government. But Paul appeared to reveal his true priorities during an interview with the candidate in Lexington over the weekend.

Paul was asked whether he supports the Americans with Disabilities Act, the landmark 1990 legislation that established a prohibition of discrimination on the basis of disability. Paul said he advocates local governments to decide whether disabled individuals deserve rights. Requiring businesses to provide access to disabled people, Paul argued, isn’t “fair to the business owner.” ...

PAUL: You know a lot of things on employment ought to be done locally. You know, people finding out right or wrong locally. You know, some of the things, for example we can come up with common sense solutions — like for example if you have a three story building and you have someone apply for a job, you get them a job on the first floor if they’re in a wheelchair as supposed to making the person who owns the business put an elevator in, you know what I mean? So things like that aren’t fair to the business owner.

Another "common sense" solution is that they won't hire people with disabilities and those who want to do business with them aren't able to. But, you know, too bad. Anything that requires a business owner to do anything is against libertarian principles. So the idea that this guy is going to be some sort of stalwart anti-corporatist is simply bizarre.

BTW: He also calls militia members his "private security detail." Here are some of them: 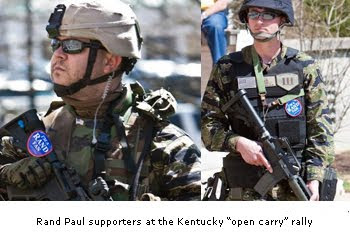