You remember that nice group of anti-Muslim English boys that Pam Geller joined up with last year? The one's she insists aren't violent fascists (is there any other kind?)

About 700 protesters from a far-right group have clashed with hundreds of riot police in northern England.

The English Defense League activists threw bottles, rocks and a smoke bomb at the riot police after the authorities penned in the protesters to keep them away from an opposing demonstration by a leftist group, United Against Fascism.

According to Spencer and Geller, all good, free people should stand with these guys against the “spread of sharia.” 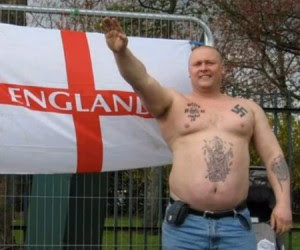 After watching the somnolent Triumph of the Wingnut rally, *brought to you by Cialis, it's hard to believe things could get violent here in the US, if only because of the rheumatism and reflux problems among the warriors. But these things can take on a life of their own when times are bad and people think that nobody's doing anything about it. As David Neiwert observed:

Glenn Beck's eyes certainly weren't dry. He started weeping while telling the crowd that somewhere out there was "the next George Washington".

Dunno about you, but when I saw pan shots of the crowd -- which was one of the whitest crowds in D.C. in recent memory -- I mostly thought I saw "the next Timothy McVeigh." But your mileage may vary.

I’m finding it hard to read about politics these days. I still don’t think people in the administration understand the magnitude of the catastrophe their excessive caution has created. I keep waiting for Obama to do something, something, to shake things up; but it never seems to happen.

Here’s what I wrote in February 2009. It’s pretty rich that now the usual suspects are accusing me of having shared the administration’s optimism. But that’s a trivial point; the important thing is that all signs are that the next few years will be a combination of economic stagnation and political witch-hunt.

This is going to be almost inconceivably ugly.