"My Savior Is Tough As Nails"


I'm sure you remember this. Before it was cool to hate the Taliban, many of us who had been watching their takeover of Afghanistan with horror for some time were appalled when this happened:

The Buddhas of Bamiyanwere two 6th century monumental statues of standing buddhas carved into the side of a cliff in the Bamyan valley in the Hazarajat region of central Afghanistan, situated 230 km (143 miles) northwest of Kabul at an altitude of 2500 meters (8,202 ft). Built in 507, the larger in 554, the statues represented the classic blended style of Gandhara art.

They were intentionally dynamited and destroyed in 2001 by the Taliban, on orders from leader Mullah Mohammed Omar, after the Taliban government declared that they were "idols" (which are forbidden under Sharia law). International opinion strongly condemned the destruction of the Buddhas, which was viewed as an example of the intolerance of the Taliban. Japan and Switzerland, among others, have pledged support for the rebuilding of the statues.

Now I realize that it is considered the gravest possible insult to draw comparisons between these evil fundamentalist theocrats and any (by definition exceptional) American, but I can't help but think of it when I read something like this:

A woman armed with a crowbar entered the Loveland Museum/Gallery on Wednesday afternoon and destroyed a controversial exhibit that some said shows Jesus Christ engaged in a sex act.

"The Misadventures of Romantic Cannibals," by Stanford University's Enrique Chagoya, has been the subject of a week's worth of protests by those who claim it is blasphemy.

"It's sad and upsetting," Chagoya said Wednesday night by phone from California. "I've never had this kind of violent reaction to my art. Violence doesn't resolve anything."

The suspect was identified by police as 56-year-old Kathleen Folden of Kalispell, Mont. She is in custody on a charge of criminal mischief, a Class 4 felony with a fine of up to $2,000.

Police said the woman entered the museum about 4 p.m. and stood in front of the exhibit. Using a crowbar or similar tool, she broke the plexiglass protecting the image and tore up the artwork. She also cut herself in the process.

Chagoya said the lithograph was one of 30 prints in a limited-edition run.

Police said there were reports of gunfire at the museum, but it turned out the noise was due to the banging of the crowbar against the plexiglass.

Art dealer Mark Michaels told Denver's 9News that he saw the woman, screaming "How can you desecrate my Lord?" as she broke into the case.

(Not that it's relevant, but the artist claims it does not depict Jesus Christ engaged in a sex act, but it a comment on the Catholic Church's priest abuse scandal.)

Now I understand that this isn't exactly the same thing. The clergy didn't order it (as far as we know) and it wasn't ancient art of another religion but rather a secular work critiquing religion and politics. But the act of destroying art that depicts unauthorized religious images comes from the same rigid, fundamentalist view.I have little doubt that others like this woman would happily destroy Muslim art they find offensive and that their conservative pastors and priests would sanction it.

What I've always found to be particularly ironic is the fact that so many of the right wing Muslim bashers went completely berserk when the Danish cartoonists were targeted and have never said a word about Christians doing the same thing right here in the US. let's just say that their principles on such matters are somewhat ... malleable.

Here's the woman who was arrested, wearing an interesting t-shirt: 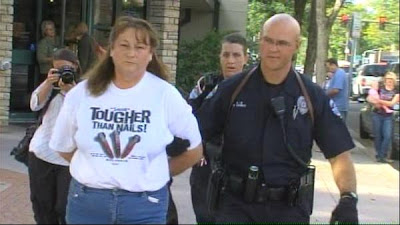 It says "My Savior Is Tougher Than Nails I am he that liveth, and was dead; and, behold, I am alive for evermore, Amen. Revelations 1:18.

When I went to look up the slogal to see what it said I found a whole bunch of Christian products with these sorts of messages about Christ's toughness and warrior machismo. (Who knew? Here I thought he was all about peace and forgiveness)Here's another one: 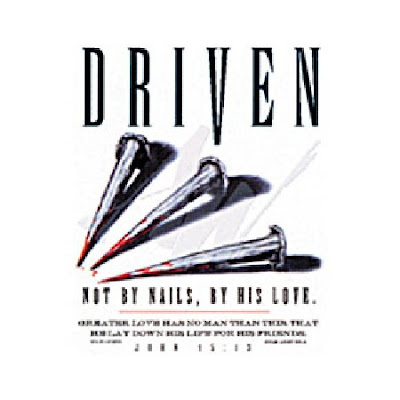 Driven
Not By Nails By His Love
Greater love has no one than this, that one lay down his life for his friends"

I don't mean to second guess the Biblical intentions of these things, I honestly have no idea what the greater theological meaning is to the people who wear them. But to a secular person they seem pretty violent and hardcore. There are a lot of these things that appear to be aping heavy metal, biker style imagery, which may be fine, but it's not exactly the doves and peace symbols of my childhood in the church.

But then I read something that cleared it up for me. Here's Bryan Fischer, Daniel Webster and Jim DeMint's go-to radio guy explaining it all for us. He's speaking of the Fire department allowing the person's house to burn down for lack of a $75.00 payment:

In this case, critics of the fire department are confused both about right and wrong and about Christianity. And it is because they have fallen prey to a weakened, feminized version of Christianity that is only about softer virtues such as compassion and not in any part about the muscular Christian virtues of individual responsibility and accountability...

This story illustrates the fundamental difference between a sappy, secularist worldview, which unfortunately too many Christians have adopted, and the mature, robust Judeo-Christian worldview which made America the strongest and most prosperous nation in the world. The secularist wants to excuse and even reward irresponsibility, which eventually makes everybody less safe and less prosperous. A Christian worldview rewards responsibility and stresses individual responsibility and accountability, which in the end makes everybody more safe and more prosperous.

That's tough as nails all right.

As for whether Fischer is someone who would blow up statues that he finds offensive to his religious beliefs, well you be the judge:

I think if we take an objective look at Islamic ideology, which is militaristic, it is totalitarian, it is fundamentally in conflict with every single major American value, then no community in its right mind would want a mosque built in its community.

You know, every single mosque is potentially, or actually, a training and recruiting center for jihadism. We know that 80 percent of the mosques in America are built with Saudi money and that the Saudi Arabian government is sending education materials to these mosques that teach them to spill the blood of infidel Christians and Jews. Which means that 80 percent of the mosques in America are inculcating and disseminating this totalitarian anti-Semitic ideology. I've seen estimates that there may be as many as 3,000 mosques in the United States. That means that perhaps 2,400 of them are preaching this kind of ideology, which is treasonous at its core … So every time we allow a mosque to go up in one of our communities, it's like planting an improvised explosive device right in the heart of your city and we just have no idea when one of these devices is going to go off but the one thing we can be sure of is that eventually, one or more of them will.

It's true that he hasn't advocated flogging or stoning anyone yet; he just believes gays should be barred from working among decent people and that unmarried women should be kept from teaching children if they get pregnant and other things the new leadership of the Republican tea party find to be quite mainstream. But he has called for Muslims to be denied citizenship and "repatriated" back to their home countries where they will be more "comfortable" since this is a Christian nation and is quite adamant that they should be denied the [privilege of serving in the US military since they are all taught to kill Christians and Jews. Who knows what may be necessary when the secular laws fail to protect this Christian country from these treasonous Muslims who still lurk in every Mosque in America plotting against "us." Stronger measures may be unavoidable.

It's a very good thing we have people who's Savior was "tough as nails" and "driven" to serve as an example of how to deal with those who disagree with them. Otherwise we might become just like them.

For the full indictment against Fischer, PFAW has been compiling the evidence, going so far as to ask NPR why they continue to feature this fellow on the its radio shows. (Why Republicans run over each other to appear with him is much less confusing. They agree with him.)