Newtie: Because it worked out so well the first time

Because It Worked So Well The First Time

"I believe the Republicans next week should pass a resolution instructing the president to enforce the law and to obey his own constitutional oath, and they should say if he fails to do so that they will zero out [defund] the office of attorney general and take other steps as necessary until the president agrees to do his job," said Gingrich. "His job is to enforce the rule of law and for us to start replacing the rule of law with the rule of Obama is a very dangerous precedent."

He didn't call for immediate impeachment hearings, but didn't rule them out if Obama balks at any congressional demands to enforce the law.

And shutting down the government was huge success that the Republicans should repeat if at all possible. Here's Newt in this week-end's WaPo:

The Washington establishment believes that the government shutdown of 1995 was a disastrous mistake that accomplished little and cost House Republicans politically.

While the shutdown produced some short-term pain, it set the stage for a budget deal in 1996 that led to the largest drop in federal discretionary spending since 1969. The discipline imposed by this budget - overall spending grew at an average of 2.9 percent a year while I was speaker of the House, the slowest rate in decades - allowed us to reach a balanced-budget deal in 1997.

This would all have been impossible had Republicans not stood firm in 1995 and shown the American people (and the White House) that we were serious about reducing spending.

Yeah, right. That's how it happened. Gingrich was a real hero: 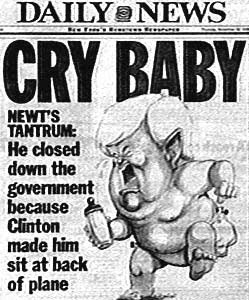 I won't be surprised if they follow Newtie's advice and rush right over that cliff again. Unfortunately, they don't have the luxury of a once in a generation technology bubble making their antics entertaining to the masses who were making money hand over fist. They might not find it quite as fun this time.