Ladies, here's some advice from a conservative, freedom loving man who cares about you:

Don’t trust your male friends. Don’t go to a man’s home at night unless you’re prepared to have sex with him. Don’t disrobe in front of a male masseur. If you take a job as a masseuse, don’t be shocked if your male customers think you’re a prostitute. And if you want to be taken seriously as a journalist, don’t pose for pictures that emphasize your cleavage.

Yes, yes, I know: Each of us wears many personas. A woman journalist like Lara Logan should be able to celebrate herself as both a journalist and a woman, even a sexy woman. But the operative word in that sentence— should— is the sticky point.

Many of the tragedies mentioned about spring from what I see as a naïve faith in the power of the modern sexual revolution. Women today are technically free to do all sorts of things that were forbidden to their grandmothers, which is all well and good. But in practice, rape and the notion of sexual conquest persist for the same reason that warfare persists: because the human animal— especially the male animal— craves drama as much as food, shelter and clothing. Conquering an unwilling sex partner is about as much drama as a man can find without shooting a gun— and, of course, guns haven’t disappeared either.

There's one culture that takes this sort of thing very seriously indeed and ensures that women don't go around provoking men to rape them: 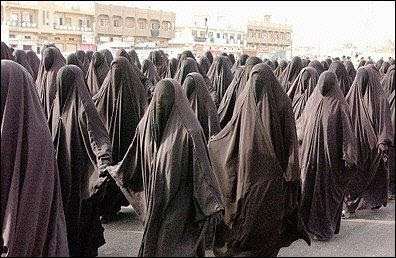 Unfortunately, even those outfits are so sexy that many poor drama seeking men get the wrong idea and are driven into uncontrolled frenzies of lust. In some countries, they work very hard to keep these women from provoking these men into raping them, by restricting not only their dress, but their basic freedom of movement. And still they refuse to understand --- what was it? --- that "conquering an unwilling sex partner is about as much drama as a man can find without shooting a gun" and insist on putting themselves in situations where these men can't help but seek their bliss:

Saudi women cannot vote, cannot drive, cannot be treated in a hospital or travel without the written permission of a male guardian. They cannot study the same things men do, and are barred from certain professions...To understand the heinous double standards at play, look no further than the case of a 19-year-old Saudi woman who was gang-raped last year.

Despite being abducted and raped by seven men, a court in Saudi Arabia sentenced her to 90 lashes because she was in a car with an unrelated man before she was abducted. Saudi Arabia's ultra-orthodox interpretation of Islamic law preaches a strict segregation of the sexes.

The young woman had the temerity to appeal - and publicize her story in the media. And so, earlier this month, the court increased her punishment to 200 lashes and six months in jail.

Perhaps that's a little bit extreme, but I would guess that the women of Saudi Arabia got the message.In fact, any woman would be a fool to report a rape in that country and they rarely do. In fact, they barely go out in public.

Sexual assault happens no matter what a woman is wearing although male dominated cultures have blamed the victims and excused the rapists since time began. There's always something. But that's not news to any of you. What's surprising is how many people still believe it and basically throw up their hands and say that half the world's population should adapt themselves to the idea that they can be raped at any time because some men just need the drama to get off. After all, even if common sense has completely filed you, it should be clear that if even burka clad women can be said to have provoked a rape it pretty much puts to rest the idea that it has something to do with how a woman dresses.


*Should note that I'm not blaming Islam or suggesting that it necessarily subjugates women, just using the extreme Saudi example to show that "modesty" doesn't prevent rape ... and it doesn't absolve the woman of blame for provoking the act among men who are determined to blame the female sex for their own violent impulses.

** Also note that most Muslim women who wear the veil, in all its various incarnations, do so of their own volition --- but that also doesn't change that fact that they can be raped. And be blamed for it.