Saturday Night At The Movies -- Crazy love ("Griff the Invisible") 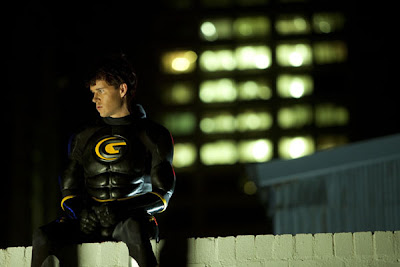 While the “outsider” is a well-established archetype in film, a new subgenre of outsider “dramedy” has emerged in recent years. It’s perhaps best described as “Revenge of the Nerds: The Millennial Generation Re-boot”; stylistically speaking it’s a little bit mumblecore and a touch of classic character study with the occasional nod to magical realism (all steeped in hipster irony). The protagonist is usually a quirky, socially awkward daydreamer who pines for love and understanding, but despite best efforts to connect with others, comes off as, well, a dork. Frequently, our hero or heroine is ridiculed and/or bullied by others, prompting deeper retreat into a private universe, or the creation of an alter ego who then (figuratively or literally) “defeats” their tormentors. Think: Office Killer, Welcome to the Dollhouse, Amelie, Secretary, Muriel’s Wedding, Ghost World, Lars and the Real Girl, Napoleon Dynamite, Eagle vs. Shark and Scott Pilgrim vs. the World. Now you can add Australian import Griff the Invisible to that list.

The twenty-something Griff (Ryan Kwanten) is an introverted Sydney office drone who, like many of the similarly insular protagonists in the films I mentioned above, appears to be one or two symptoms shy of an Asperger’s diagnosis. And the more he tries to keep himself to himself (i.e., make himself “invisible”), it seems, the more he incites the office bully (Toby Schmitz) to cruelly prank him in front of his co-workers. Poor Griff (who rarely even makes direct eye contact with anyone) hasn’t figured out that most basic tenet of social anthropology-the more you assimilate, the less attention you draw to yourself (if that is your wont). His only solace from these daily humiliations comes in the form of an alter ego, “Griff the Protector”. A legend in his own mind, Griff the Protector is a nocturnal crime-fighter, who takes names and kicks ass for the good of the neighborhood.

The unfortunate reality is that the Sydney police have been receiving numerous complaints from Griff’s neighbors about some weirdo running around at night wearing a rubber superhero suit, peering into windows and creeping people out. “Oh no, you’re not doing it again, are you?” asks Griff’s concerned older brother Tim (Patrick Brammall), implying that Griff has a history of difficulties delineating reality from fantasy. You can tell that Tim (the responsible, “normal” sibling) cares about his brother, but is at the end of his rope as to how he’s going to drag Griff out of his perpetual state of arrested development and (kicking and screaming) into adult life. Besides, he has his own life to live, with a career, a bright future and a new girlfriend named Melody (Maeve Dermody).

However, as we get to know Melody, we wonder if she’s hooked up with the “right” brother. For example, whenever Tim starts prattling on about plans for the future, Melody tends to drift off, fixing her gaze on an indeterminate point somewhere on the horizon. And when it’s time to say “good night”, her shirking body language and quick pull away when Tim tries to give her a peck on the cheek doesn’t bode well for the couple’s future, either. In fact, the only time Melody gets jazzed is when she’s alone in her room, reading up on particle physics. She has become obsessed with the possibilities of passing a human body through solid matter. She has been practicing the trick on her bedroom wall; needless to say, she’s been sustaining head injuries (which could explain the “drifting off” thing). I know what you’re thinking. Are these two kooks (Griff and Melody) going to get together? Well (as my Dad always used to say), does a city bear shit in the woods!?

This is the first feature film for writer-director Leon Ford, and while it’s a bit of an uneven affair, Kwanten and Dermody have great screen chemistry and lend a lot of charm to the film. However, the characters, as written, teeter precariously between “endearingly quirky” and “mentally ill” (you are torn between wanting to cheer them on, or wishing that someone would whisk them off to the nearest psych ward for evaluation). That aside, Ford’s film is a pleasantly diverting 90 minutes (as long as you don’t set your expectations too high). And the film’s message (if I’m reading it correctly), which is something along the lines of: Who cares what people believe about you, as long as you have someone in your life who truly believes in you? is certainly an encouraging one, nu?

Where the Wild Things Are