Ritual defamation Part XXIV: liberals join the hissy
by digby
I hear a lot of chatter about how the left needs to forget about electoral politics, stop talking and start organizing, go local and all the other stuff I've been hearing off and on for as long as I can remember. And there's an element of truth in all of it.
But if there is one thing that "the left" could do right this minute that would change the frustrating political dynamic it's to get ostensible allies to stop doing this:

Today, the conservative blogosphere is going crazy condemning Krugman's article—and I don't blame them one bit. Indeed, the only thing I do not understand is why more progressives are not joining in that condemnation, as Krugman's piece only serves to set back the principles and causes of liberals and progressives everywhere. By forgetting what is important about yesterday's commemorations, Krugman has played right into the hands of those who would use such a reaction to tar the true intent of liberal commentators and, by extention, every other progressive in the country.

Paul Krugman very much owes the families of 9/11 victims and the first responders who survived an apology. I hope he'll take the opportunity to offer that apology and acknowledge his error, as failing to do so makes all who oppose the right-wing agenda look bad.

No wonder president Obama doesn't want to stick his neck out. With liberal church ladies ready to call for the smelling salts at the drop of a hat, he'd be a fool to do it.
No, there is no obligation to call out Paul Krugman because the right wing blogosphere is acting, as usual, like a bunch of hypocritical phonies and staging a grand hissy fit to destroy one of the only strong national voices for the left over something they don't really give a damn about. This is, after all, the same group that refused to pay for health care for first responders so you'll have to forgive me for failing to be properly respectful of their very delicate sensibilities over this issue.
Sensibilities, by the way, that are so delicate that after they read Krugman's column they apparently spent the entire day in a darkened room with a cool towel over their heads and missed this story: 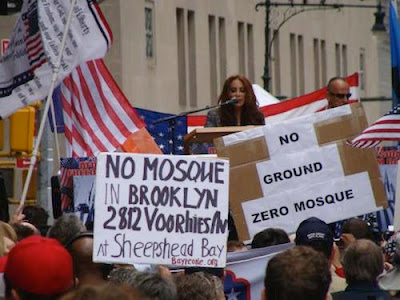 Geller’s trip to the Ground Zero World Trade Center Memorial, where she preached against Islam and protested the building of Cordoba House, aka the Ground Zero Mosque, conveniently coincided with the New York City première of her “documentary,” The Ground Zero Mosque: The Second Wave of the 911 Attacks. Geller describes her (other?) group, American Freedom Defense Initiative (AFDI), which, along with her Stop Islamization of America group, also exists to curtail the First Amendment freedoms of Muslim-​Americans, as — get this! — a “human rights organization!”

To boot, Market Watch, an arm of Rupert Murdoch’s Wall Street Journal, actually last week printed a press release from Geller that falsely claims, “while White House guidelines forbid official 9/​11 ceremonies from mentioning who attacked the U.S. on that day or why, the 9/​11 Freedom Rally features more honest speakers,” and also falsely stated:

While clergy, 9/​11 first responders, and 9/​11 family members are barred and/​or not invited to the official ceremonies, all are welcome at the 9/​11 Freedom Rally.

Those groups were not “barred” from attending.

If these right wing bloggers are so sensitive about politics on 9/11 maybe they could clean up their own house first.

This controversy is utter nonsense. Even this breathless report admits that Krugman didn't say anything that was actually wrong, only that politics are "inappropriate" on 9/11 --- a rule that I don't recall signing on for and neither did the rest of the country. I have no trouble with Geller or Krugman or anyone else expressing political thoughts on 9/11. Indeed, considering how repressive Islamic fundamentalism is, it may be the greatest tribute we can pay to the dead. 9/11 was a horrible day, but it wasn't an act of God. It was the ultimate violent political act --- terrorism. The last thing we need is to memorialize it as a sacred day above politics.
I wrote a piece a while ago called "The art of the hissy fit" about this manipulative right wing pearl clutching and I'll re-run it here because it's clear that some people on our side are completely clueless about how this works:

I first noticed the right's successful use of sanctimony and faux outrage back in the 90's when well-known conservative players like Gingrich and Livingston pretended to be offended at the president's extramarital affair and were repeatedly and tiresomely "upset" about fund-raising practices they all practiced themselves. The idea of these powerful and corrupt adulterers being personally upset by White House coffees and naughty sexual behavior was laughable.

But they did it, oh how they did it, and it often succeeded in changing the dialogue and tittilating the media into a frenzy of breathless tabloid coverage.

In fact, they became so good at the tactic that they now rely on it as their first choice to control the political dialogue when it becomes uncomfortable and put the Democrats on the defensive whenever they are winning the day. Perhaps the best example during the Bush years would be the completely cynical and over-the-top reaction to Senator Paul Wellstone's memorial rally in 2002 in the last couple of weeks leading up to the election.

With the exception of the bizarre Jesse Ventura, those in attendance, including the Republicans, were non-plussed by the nature of the event at the time. It was not, as the chatterers insisted, a funeral, but rather more like an Irish wake for Wellstone supporters — a celebration of Wellstone's life, which included, naturally, politics. (He died campaigning, after all.) But Vin Weber, one of the Republican party's most sophisticated operatives, immediately saw the opportunity for a faux outrage fest that was more successful than even he could have ever dreamed.

By the time they were through, the Democrats were prostrating themselves at the feet of anyone who would listen, begging for forgiveness for something they didn't do, just to stop the shrieking. The Republicans could barely keep the smirks off their faces as they sternly lectured the Democrats on how to properly honor the dead — the same Republicans who had relentlessly tortured poor Vince Foster's family for years.

It's an excellent technique and one they continue to employ with great success, most recently with the entirely fake Move-On and Pete Stark "controversies." (The Democrats try their own versions but rarely achieve the kind of full blown hissy fit the Republicans can conjure with a mere blast fax to Drudge and their talk radio minions.)

But it's about more than simple political distraction or savvy public relations. It's actually a very well developed form of social control called Ritual Defamation (or Ritual Humiliation) as this well trafficked internet article defines it:

Defamation is the destruction or attempted destruction of the reputation, status, character or standing in the community of a person or group of persons by unfair, wrongful, or malicious speech or publication. For the purposes of this essay, the central element is defamation in retaliation for the real or imagined attitudes, opinions or beliefs of the victim, with the intention of silencing or neutralizing his or her influence, and/or making an example of them so as to discourage similar independence and "insensitivity" or non-observance of taboos. It is different in nature and degree from simple criticism or disagreement in that it is aggressive, organized and skillfully applied, often by an organization or representative of a special interest group, and in that it consists of several characteristic elements.

The article goes on to lay out several defining characteristics of ritual defamation such as "the method of attack in a ritual defamation is to assail the character of the victim, and never to offer more than a perfunctory challenge to the particular attitudes, opinions or beliefs expressed or implied. Character assassination is its primary tool." Perhaps its most intriguing insight is this:

The power of ritual defamation lies entirely in its capacity to intimidate and terrorize. It embraces some elements of primitive superstitious belief, as in a "curse" or "hex." It plays into the subconscious fear most people have of being abandoned or rejected by the tribe or by society and being cut off from social and psychological support systems.

In a political context this translates to a fear by liberal politicians that they will be rejected by the American people --- and a subconscious dulling of passion and inspiration in the mistaken belief that they can spare themselves further humiliation if only they control their rhetoric. The social order these fearsome conservative rituals pretend to "protect," however, are not those of the nation at large, but rather the conservative political establishment which is perhaps best exemplified by this famous article about how Washington perceived the Lewinsky scandal. The "scandal" is moved into the national conversation through the political media which has its own uses for such entertaining spectacles and expends a great deal of energy promoting these shaming exercises for commercial purposes.

The political cost to progressives and liberals for their inability to properly deal with this tactic is greater than they realize. Just as Newt Gingrich was not truly offended by Bill Clinton's behavior (which mirrored his own) neither were conservative congressmen and Rush Limbaugh truly upset by the Move On ad --- and everyone knew it, which was the point. It is a potent demonstration of pure power to force others to insincerely condemn or apologize for something, particularly when the person who is forcing it is also insincerely outraged. For a political party that suffers from a reputation for weakness, it is extremely damaging to be so publicly cowed over and over again. It separates them from their most ardent supporters and makes them appear guilty and unprincipled to the public at large.

Ritual defamation and humiliation are designed to make the group feel contempt for the victim and over time it's extremely hard to resist feeling it when the victims fail to stand up for themselves.

There is the possibility that the Republicans will overplay this particular gambit. Their exposure over the past few years for incompetence, immorality and corruption, both personal and institutional, makes them extremely imperfect messengers for sanctimony, faux or otherwise. But they are still effectively wielding the flag, (or at least the Democratic congress is allowing them to) and until liberals and progressives find a way to thwart this successful tactic, it will continue. At this point the conservatives have little else.

What do you suppose today's enforcers of proper decorum would say to this?

Americans too often teach their children to despise those
who hold unpopular opinions. We teach them to regard as
traitors, and hold in aversion and contempt, such as do
not shout with the crowd, and so here in our democracy we
are cheering a thing which of all things is most foreign
to it and out of place - the delivery of our political
conscience into somebody else's keeping. This is
patriotism on the Russian plan.
— Mark Twain