Dissonance among the peasants

Dissonance among the peasants 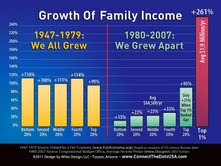 How did that happen?

[P]rofit margins have reached levels not seen in decades. The challenge, which we have discussed many times before: what is driving these margins. One useful way to deconstruct profits is to measure them from peak to peak, and analyze what changed. As shown in the first chart, S&P 500 profit margins increased by ~1.3% from 2000 to 2007. There are a lot of moving parts in the margin equation, but as shown in the second chart, reductions in wages and benefits explain the majority of the net improvement in margins. This trend has continued; as we have shown several times over the last two years, US labor compensation is now at a 50-year low relative to both company sales and US GDP.

That was JP Morgan last summer. Here's CityGroup from a few years back:

The World is dividing into two blocs - the Plutonomy and the rest. The U.S., UK, and Canada are the key Plutonomies - economies powered by the wealthy.The world is dividing into two blocs - the plutonomies, where economic growth is powered by and largely consumed by the wealthy few, and the rest. Plutonomies have occurred before in sixteenth century Spain, in seventeenth century Holland, the Gilded Age and the Roaring Twenties in the U.S. What are the common drivers of Plutonomy? Disruptive technology-driven productivity gains, creative financial innovation, capitalist friendly cooperative governments, an international dimension of immigrants and overseas conquests invigorating wealth creation, the rule of law, and patenting inventions. Often these wealth waves involve great complexity, exploited best by the rich and educated of the time.
We project that the plutonomies (the U.S., UK, and Canada) will likely see even more income inequality, disproportionately feeding off a further rise in the profit share in their economies, capitalist-friendly governments, more technology-driven productivity, and globalization.
Most “Global Imbalances” (high current account deficits and low savings rates, high consumer debt levels in the Anglo-Saxon world, etc) that continue to (unprofitably) preoccupy the world’s intelligentsia look a lot less threatening when examined through the prism of plutonomy. The risk premium on equities that might derive from the dyspeptic “global imbalance” school is unwarranted - the earth is not going to be shaken off its axis, and sucked into the cosmos by these “imbalances”. The earth is being held up by the muscular arms of its entrepreneur-plutocrats, like it, or not.

I think it would have been hard for Americans to adjust to the idea of the whole world competing with them in any case. In the post war years, we had it made. But these plutocrats are so blatantly gluttonous that they've drawn attention to themselves. I don't know what they expected, but they are supposed to be the smartest people in the world. I don't think it takes a genius to see that the chart above might just cause a little dissonance among the peasants.