Robin Hood(s) to the rescue

Robin Hood(s) to the rescue 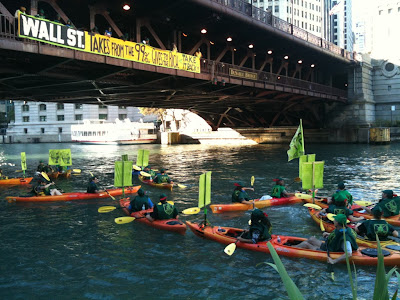 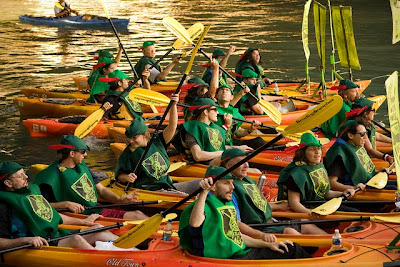 I'm a sucker for Robin Hood. I think this is great:

Today in Chicago, 40 activists dressed as Robin Hoods kayaked down the Chicago River while several hundred more protesters rallied outside a hotel to deliver a message to the Mortgage Banksters attending a national conference inside: It's time for big banks to Pay US Back!

The Mortgage Bankers Association is one of the most powerful lobbying organizations for the big banks and they represent the mortgage arms/tentacles of the BIG 4--Wells Fargo (who happens to be sponsoring the conference), Bank of America, JPMorgan Chase and Citigroup--as well as numerous independent mortgage companies that created the housing bubble and blew up the economy in 2008.

One of the MBA claim's to fame is defeating Judicial Loan Modifications - a piece of legislation that Congress was attempting to pass in order to help millions of homeowners who had fallen victim to the housing crisis. Under the current law, if you only have one home you can’t declare bankruptcy and have a judge renegotiate your debts. But if you own two homes, or a boat, you can. This is unfair and biased against working and middle class families that don’t have boats, airplanes and homes in the Hamptons. Chicago has been hardest hit by foreclosures, mostly due to the MBA blocking this legislation.

Today, the MBA held a conference in a downtown Chicago hotel.

While 600 protesters rallied and chanted outside the hotel, a team of 40 kayakers dressed like Robin Hood paddled down the Chicago River and anchored outside of the hotel chanting "We Are the 99%!" for 30 minutes while another team of activists dropped a banner from the DuSable Bridge at Michigan Avenue.

Check out all the pics here. It looks like a rollicking gathering.