Police, pain and peppers
by digby

Quite a few professional police officers and criminal justice academics are weighing in on this notion of "pain compliance" in the wake of that pepper spray assault at UC Davis.

As awful as these incidents have been, I can't tell you heartened I am by the fact that people are finally speaking up on this subject. Indiscriminate tasering has been going on for years now, it's clearly documented and rarely has anyone questioned the right of the police to inflict pain for mere non-compliance. (The tasering of the mentally ill is a separate subject.) YouTubes have gone viral and the comments to them suggest that many, many people find such violence hilarious and support it fully. I won't even go into the way Hollywood uses it for cheap laughs.

Indeed, the most common arguments I hear on this topic is "if an officer tells you to do something, you don't ask questions, you do it" and "the cops first obligation is to protect his own safety and the safety of other cops." This means that a police officer essentially has the right to immediately taser/pepper spray anyone who doesn't immediately respond in order to preserve his or her own safety. And the definition of "safety" is pretty malleable, as we saw this week-end:

UC Davis Police Chief Annette Spicuzza said officers used force out of concern for their own safety after they were surrounded by students. 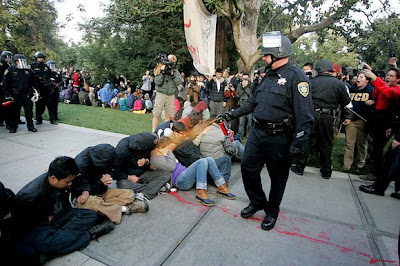 Does any one remember this? Probably not, since it was hardly covered except by a few blogs and Democracy Now:

The New Orleans City Council has unanimously voted to move ahead with the demolition of 4,500 units of public housing. Under the plan, the city’s four largest public housing developments will be razed and replaced with mixed-income housing. Hundreds of people were turned away from the City Council meeting. Police shot protesters with pepper spray and tasers.

Many police officers and citizens believe that pain compliance on peaceful demonstrors is completely acceptable, including the use of batons. Here's one commenting on the UC Davis assault:

Charles J. Kelly, a former Baltimore Police Department lieutenant who wrote the department's use of force guidelines, said pepper spray is a "compliance tool" that can be used on subjects who do not resist, and is preferable to simply lifting protesters.

"When you start picking up human bodies, you risk hurting them," Kelly said. "Bodies don't have handles on them."

After reviewing the video, Kelly said he observed at least two cases of "active resistance" from protesters. In one instance, a woman pulls her arm back from an officer. In the second instance, a protester curls into a ball. Each of those actions could have warranted more force, including baton strikes and pressure-point techniques.

And in everyday life they use tasers and pepper spray on grandmothers and children, on people already in restraints, in wheelchairs and in sickbeds. They do it all the time. Normally it is considered so "harmless" that it doesn't even merit a small news story --- unless someone dies. Which happens fairly frequently.
Here is a former police officer and professor of criminal justice explaining what's wrong with all this:

In the police academy, I was taught to pepper-spray people for non-compliance. Ie: “Put your hands behind your back or I’ll… mace you.” It’s crazy. Of course we didn’t do it this way, the way were taught. Baltimore police officers are too smart to start urban race riots based on some dumb-ass training. So what did we do to gain compliance? We grabbed people. Hands on. Like real police. And we were good at it.

Some people, perhaps those who design training programs, think policing should be a hands-off job. It can’t be and shouldn’t be. And trying to make policing too hands-off means people get Tased and maced for non-compliance. It’s not right. But this is the way many police are trained. That’s a shame. (Mind you, I have no problem using such less-lethal weapons on actual physical threats, but peaceful non-compliance is different.)

I know that it's arduous for the police to have to physically deal with citizens or remove protesters engaged in non-violent civil disobedience, but that's how we do things in America. Or at least that's what we're supposed to do in America.
This amazing article from a couple of weeks ago in The Nation by the former chief of police of Seattle, goes deeply into the broader subject of police militarization:

[T]he police response to the Occupy movement, most disturbingly visible in Oakland—where scenes resembled a war zone and where a marine remains in serious condition from a police projectile—brings into sharp relief the acute and chronic problems of American law enforcement. Seattle might have served as a cautionary tale, but instead, US police forces have become increasingly militarized, and it’s showing in cities everywhere: the NYPD “white shirt” coating innocent people with pepper spray, the arrests of two student journalists at Occupy Atlanta, the declaration of public property as off-limits and the arrests of protesters for “trespassing.”

The paramilitary bureaucracy and the culture it engenders—a black-and-white world in which police unions serve above all to protect the brotherhood—is worse today than it was in the 1990s. Such agencies inevitably view protesters as the enemy. And young people, poor people and people of color will forever experience the institution as an abusive, militaristic force—not just during demonstrations but every day, in neighborhoods across the country.

Much of the problem is rooted in a rigid command-and-control hierarchy based on the military model. American police forces are beholden to archaic internal systems of authority whose rules emphasize bureaucratic regulations over conduct on the streets. An officer’s hair length, the shine on his shoes and the condition of his car are more important than whether he treats a burglary victim or a sex worker with dignity and respect. In the interest of “discipline,” too many police bosses treat their frontline officers as dependent children, which helps explain why many of them behave more like juvenile delinquents than mature, competent professionals. It also helps to explain why persistent, patterned misconduct, including racism, sexism, homophobia, brutality, perjury and corruption, do not go away, no matter how many blue-ribbon panels are commissioned or how much training is provided.

As I have written too many times, this militarization of our society at large, not just the police, was bound to catch up with us. (The recent calling of the president the "commander in chief" of the people, rather than just the military symbolizes this as well as anything.)

I think BagNews summed it up with these two pictures: 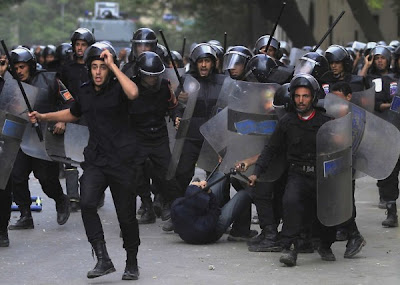 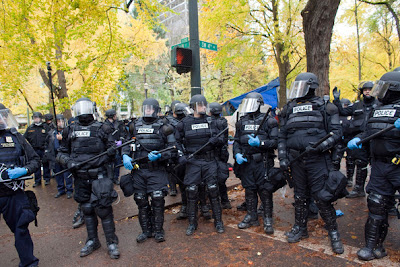 After all the cracking down that’s been going on Stateside, a fresh look at Egyptian riot cops today reminds me how much we do things bigger and better in America.

(Click here to see the story of the two pictures --- the first is Cairo the second is Portland.)
Oh, and for those of you who complained about my characterization of pepper spray as torture read this from today's Scientific American. It's torture all right. And it's dangerous as hell, particularly when inhaled:

As the North Carolina researchers point out, any compound that can influence nerve function is, by definition, risky. Research tells us that pepper spray acts as a potent inflammatory agent. It amplifies allergic sensitivities, it irritates and damages eyes, membranes, bronchial airways, the stomach lining – basically what it touches. It works by causing pain – and, as we know, pain is the body warning us of an injury.

In general, these are short term effects. Pepper spray, for instance, induces a burning sensation in the eyes in part by damaging cells in the outer layer of the cornea. Usually, the body repairs this kind of injury fairly neatly. But with repeated exposures, studies find, there can be permanent damage to the cornea.

The more worrisome effects have to do with inhalation – and by some reports, California university police officers deliberately put OC spray down protestors throats. Capsaicins inflame the airways, causing swelling and restriction. And this means that pepper sprays pose a genuine risk to people with asthma and other respiratory conditions.

And there have been numerous studies and reports to that effect, including the documentation of numerous deaths. And still it's used. 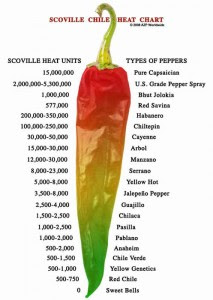