The age of Citizens United: it's been with us for a while now

The age of Citizens United

This is an interesting discussion on Up With Chris Hayes yesterday morning about campaign finance.

Visit msnbc.com for breaking news, world news, and news about the economy

The disagreement between Eliot Spitzer and Melissa Harris Perry is instructive. It's clear that many of us are confused about Citizens United --- the fact is that nothing any wealthy individual like Sheldon Adelson is doing in this cycle is a result of that ruling. Citizens United lifted the restrictions on corporations and union spending in elections, period. It had nothing to do with wealthy individuals donating to PACs in order to support candidates. That has been legal since 1976:

The Supreme Court's ruling in Buckley v. Valeo (1976) held that expenditures made independently of a candidate's campaign could not be limited under the Constitution. If expenditures are made in "coordination" with a campaign, however, they may be regulated as contributions.

Citizens United brought about the SuperPAC in order to facilitate the newly legal unlimited corporate giving, but the huge donations from wealthy individuals to these PACs is something they always could have done. Indeed, the single largest donation to Romney's SuperPAC is "John Paulson, a billionaire and hedge fund manager who is, according to Politico, 'famous for [having enriched] himself by betting on the collapse of the housing industry.'" There was nothing stopping him from doing this before either.

So why the big change? I think it has to do with two things, one cultural and one economic. The first is simply that wealthy benefactors are willing to put their names on their politics. The overt lobbying for Randroid values among the super wealthy has been well documented. They are shameless.

The second, and probably more important, is that these wealthy people have so much more money than they had before. Adelson is the 8th richest man in the United States. The Koch Brothers are the 4th and 5th. And their wealth has grown exponentially in recent years as everyone else has been struggling: 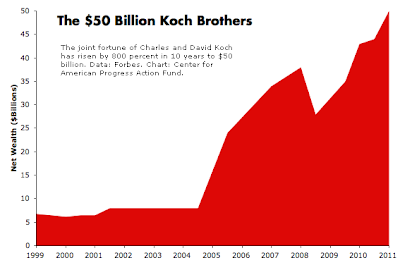 When you have this much money, buying elections is a very cheap investment. It's these two factors --- the swashbuckling culture of wealth and income disparity that lie at the heart of our current problems.
This is not to say that campaign reform isn't useful. There are many groups out there coming together to try to overturn corporate personhood, Citizens United and demand public funding of campaigns, among other things. In this interesting analysis, Mark Schmitt concurs with Eliot Spitzer in the clip above about the potential dangers but posits that process could yield tangential results around the margins even if it fails to reach the intended goals. Schmitt likens it to the anti-abortion crusade on the right, in which the organizing ends up depending on the failure to reach goals to sustain itself, but I think there is a positive tangential result in terms of the cultural and social pressure such a campaign could produce. There will always be shameless rich people of course. But there's no reason society should allow them to celebrate their shamelessness. There have been many things that were once socially acceptable and no longer are --- it's hard, but not impossible.

Still, more campaign finance reform probably won't eliminate the total corruption of the DC institutions where 25 year old staffers are enticed by the early prospect of mid six figure lobbyist salaries and where everyone expects to cash out big. And it can't change the crumbling foundation of a nation that's perfectly willing to allow vastly wealthy individuals and institutions to evade the rule of law and brag about it while hoarding more and more of the nation's wealth for themselves.

In that Chris Hayes clip I think David Stockman probably has it right and it's a very uncomfortable observation. In order for our democracy to function as it should we may end up having to restrict free speech in some limited way around our elections. It's an appalling solution to an appalling problem. But until we can make a very substantial cultural shift that makes corruption shameful and an economic shift that redistributes some of this wealth back to the middle class, we're going to be seeing more and more ostentatious corruption of our democracy. That's a very tall order. I'm guessing we're going to have to come up with a way to do it all.