Santorum thinks that people have kids for the money. Seriously. You may have thought that the baby boom happened because people had just gone through 15 years of depression and world war but it was really for the tax deduction.

"A President Rick Santorum will start an ongoing national discussion about family, marriage and fatherhood"

Oh joy. I wrote about his anti-birth control stance yesterday, but the whole comment wasn't transcribed. Now that I listened to the whole thing it's worse than I thought:


One of the things I will talk about that no president has talked about before is what I think is the danger of contraception. The whole sexual libertine idea that many in the Christian faith have said, well, it's ok, contraception's ok. But it's not ok.

If you can take one part out, if it's not for the purpose of procreation, that's not one of the reasons you diminish this very special bond between men and women. So why can't you take other parts of it out? It becomes deconstructed to the point where it's simply pleasure...

These are profound issues that we only like to talk about from a scientific point of view. Well that's one point of view, but we also need to have the courage to talk about the moral aspects of it and the purpose and rationale for why we do what we do.

Yeah, he's right. we need to talk about all that. And Santorum is just the guy to lead that conversation. 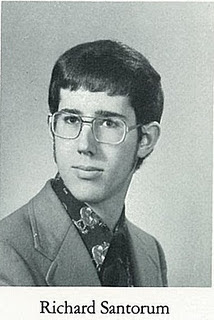