Saturday Night At The Movies --- Dr. Terrible’s house of horrible: "The Theatre Bizarre" 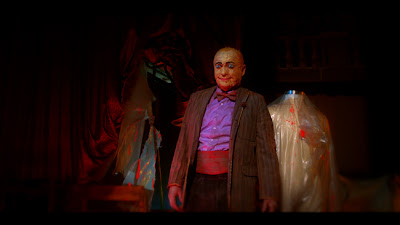 Thank you! I’m here until Thursday: The Theatre Bizarre

I know you didn’t ask, but in case you were wondering, the horror anthology is alive and deliriously unwell, as evidenced in a Grand Guignol-worthy collection of short films called The Theatre Bizarre. Think The Night Gallery meets Red Shoe Diaries…hosted by the Jim Rose Circus. And I should warn you up front: this one’s not for the squeamish.

Actually, your framing hosts for the evening are a troupe of creepy performers who lurch about the stage like crazed marionettes, while an emcee (the ever-disturbing Udo Kier, getting his Uncle Fester on in a big way) introduces each of the six vignettes to his po-faced audience of one (Virginia Newcomb), a young woman who has straggled in to the seemingly abandoned venue. These interludes (directed by Jeremy Kasten) do lend symmetry to a collection that would otherwise have a tenuous sense of thematic cohesion.

Things perk up a bit in the next piece, “I Love You” (directed by Buddy Giovinazzo). In this Memento

-flavored tale, a man awakens on his bathroom floor with a gashed hand and partial amnesia. As he flashes back, we are given glimpses of a highly dysfunctional relationship that he may or may not still be embroiled in. It’s a gruesome, yet cleverly constructed cautionary tale about obsession, possessiveness, and knowing when to let go.

The darkly comic “Wet Dreams”, directed by B-movie cult hero Tom Savini (and possibly inspired by the charming real-life story of John and Lorena Bobbit), is the grossest, yet (perversely) the most entertaining installment. An abusive husband, who seems to be quite literally trapped in a Freudian nightmare, gets his just desserts; whether he gets them literally or figuratively is left up to the viewer. Savini also casts himself as a psychiatrist. And a warning: you may be put off of chorizo and eggs for quite some time.

Next, Douglas Buck helms “The Accident”. After a little girl witnesses a horrific road accident, she peppers her mother with questions about mortality. It’s a simple concept, but beautifully acted, artfully photographed and quite resonant. Hands down, it is the best of the bunch. In fact, if I had seen it outside the context of this particular anthology (say, as a stand-alone at a short film festival), I would consider it Oscar-worthy; it’s that good.

Now, the one that made me look away. Repeatedly. “Vision Stains” (directed by Karim Hussain) gleefully recalls the most famously unwatchable moment in Bunuel’s Un Chien Andalou

. Repeatedly. This is too bad, because while I give Hussain’s piece an “A” for originality, I couldn’t stop squirming (then again, I’m a wimp). A homeless female serial killer haunts urban back alleys, seeking out women who (from her judgment, at least) already exist in a kind of living death; junkies, alkies and the generally disenfranchised. The twist is that, at the moment of their literal death, she sees theirlife flash in front of her eyes (it involves a hypodermic needle…don’t ask). Then she dutifully records their biographies into her journal (goes to show what some people won’t do for a good story).

The final “chapter”, or perhaps tagged more appropriately, the “dessert” is directed by David Gregory. “Sweets” is a mixed bag; Annie Hall

. An annoyingly whiney fellow begs his dominatrix-like girlfriend not to dump him, while flashbacks recall the arc of their relationship (which is mostly comprised of the couple force-feeding each other voluminous amounts of syrupy, gloppy, sickly-sweet substances). Okay, I get it; relationships can be “sticky”, and falling out of love is not unlike suffering a huge sugar crash. While it’s a welcome bit of levity (considering what has preceded it), the piece ultimately overdoses on its own metaphorical sugar high. Although, if you’re on a diet, it would be great aversion therapy.

Granted, The Theatre Bizarre is not for all tastes. That being said, there is nothing here that I would consider to be “tasteless” purely for the sake of being tasteless, if you know what I’m saying. That’s because there is a certain amount of intelligence at work here, coupled with a sense that the filmmakers are occasionally peeking around the curtains to wink at the audience and assure us, “hey, it’s only a movie”. That is what separates this film from most contemporary horror, which has been co-opted and essentially overrun by some truly abhorrent subgenres (like “torture porn”-no thanks!). God, I miss Rod Serling.

Picture if you will: Twilight Zone: The Movie, Creepshow, Tales From the Darkside: The Movie, Tales From the Crypt, Black Sabbath, Kwaidan, Dead of Night (1945), Dr. Terror’s House of Horrors (1943), Tales of Terror, Twice-Told Tales, The House That Dripped Blood, Asylum, The Vault of Horror, Cat’s Eye, Two Evil Eyes, Torture Garden, The Offspring, The Monster Club, From Beyond the Grave, Trick ‘r Treat.