Saturday Night At The Movies --Girls will be boys

Girls will be boys 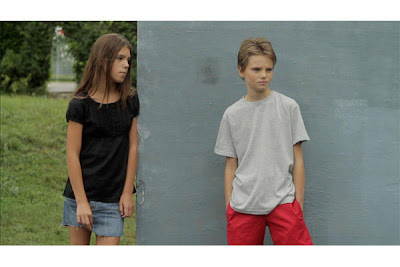 It gets better: Tomboy

“You’re different from (the other boys),” says Lisa (Jeanne Disson), sans any trace of irony in writer-director Celine Sciamma’s coming-of-age tale, Tomboy. She is talking to her new friend Michael, who recently moved into her neighborhood on the outskirts of Paris; the boy on whom she’s developing a crush. Indeed, there is something “different” about Michael. It’s a possibility that Lisa, with the insouciance of a starry-eyed pre-pubescent in the thrall of puppy love, would likely never ponder (hence an absence of irony). “Michael” is the self-anointed nom de plume of a girl…named Laure (Zoe Heran).

Laure lives with her loving parents (Sophie Cattani and Mathieu Demy) and precocious little sister, Jeanne (Malonn Levana). Mom is very pregnant and resting up these days, so we see Laure spending a lot of time with her dad, who is patiently teaching her how to drive in the film’s opening. Although dad is retaining control of the accelerator and brake (after all, Laure is only ten), we glean that she has a fearlessness and assured sense of “self” belying a ten year-old (and in a subtle way, challenging traditional societal expectations of gender behavior). This is especially apparent in a wonderfully observed scene where Laure (in her guise as Michael, who she hides from her family) watches the neighborhood boys playing soccer, carefully studying their body language and mannerisms. She is particularly bemused by their propensity for serial spitting, and taking pee breaks en masse (you know, typical males…spraying everywhere). Soon, “Michael” is on the field; shirtless, spitting and generally displaying appropriately surly behaviors. But for how long can Laure pull this off? It’s late summer, and a new school year looms; surely her parents won’t register her as Michael (and what about roll call, or gym class?).

Although it may appear on paper that this story holds all the dramatic tension of an Afterschool Special, it is precisely the lack of drama (or, as Jon Lovitz used to exclaim on SNL…”ACT-ing!”) that makes Tomboy one of the most naturalistic, sensitive and genuinely compassionate films I’ve seen about “gender confusion”. What’s most interesting here is that it is not the protagonist who is “confused”. Laure knows exactly who (she?) is; this is not so much about the actions of the main character as it is about the reactions of those around her (and perhaps the viewer as well). There is one thing the director seems to understand quite well, and that is that you can learn a lot about a society’s mores by watching its children at play; Sciamma devotes large chunks of screen time to simply allow us to observe kids doing, well, what kids do when they get together.

Tackling the subject of childhood sexuality is always a potential minefield for a filmmaker, which is probably why so few venture to go there (the last film I saw that handled it with such deftness was Miranda July’s Me and You and Everyone We Know

). Thanks to the combination of an unobtrusive (if leisurely) approach, even-handed direction, a perceptive screenplay (by the director), and extraordinary performances by the child actors (especially from Heran, who vibes like a Mini-Me Jean Seberg with her pixie hairdo) I was transported back to that all-too-fleeting “secret world” of childhood. It’s that singular time of life when worries are few and everything feels possible (before that mental baggage carousel backs up with too many overstuffed suitcases). And it’s a lovely ode to self-acceptance…which is a good thing. Any ten-year old can tell you that.