There aren't many people like Matt Stoller who will go on TV and make this argument:

I agree with him on this and I would add that I think all the kow-towing to the hypocritical socially conservative churches on human rights has been really bad for ... humans. I would go even further and question why I should care about the delicate sensibilities of these allegedly liberal Catholic elites who hypocritically use birth control themselves and yet insist their Church be able to use it as a political cudgel on behalf of the most retrograde reactionaries in our political system. Their position on this is completely incomprehensible to me. One can only wonder what would happen if they had the courage of their contraception instead of carrying on this absurd charade.

As I said earlier, this particular policy "accommodation" isn't a bad thing. I don't have the same concerns about accounting and paperwork processes as the very pious believers apparently do. As long as women can easily obtain the coverage they are entitled to, it's fine with me. But on the politics, I think the whole flap has allowed the Churches to obtain more authority in the realm of women's rights and I think we'll come to regret it.

As people have said over and over again this past week, everyone has issues of conscience with how their money is spent by the government. Every Catholic is forced to pay taxes that are used for capital punishment, for instance. Every evangelical Christian is forced to pay taxes that pay for teachers to teach evolution. Every anti-war liberal is forced to pay taxes to support wars. This is the cost of living in a pluralistic society. And everyone accepts it. It's only when it comes to the most personal matters of sex and sexuality of other people where suddenly "conscience" is allowed to trump individual rights.

The Bishops, working hand in hand with their GOP allies, have spoken now and here's what they've said:

The Conference, after earlier calling the change a "first step in the right direction," issued a lengthy statement overnight blasting the plan. And they joined others in calling for legislation in Congress to reverse the policy, something Republicans said they were not abandoning despite Friday's announcement.

"We think there needs to be a legislative fix to protect our religious liberties," Bishop William Lori, a member of the Conference, told Fox News on Saturday. "I think that our First Amendment religious rights are far too precious to be entrusted to regulatory rules."

Lori and the rest of the Conference said they want to see the "mandate" rescinded altogether. They pointed out several lingering concerns. They said the change appears to make no consideration for religious insurers or self-insuring religious employers -- or for religious for-profit employers and secular nonprofit employers.

The statement from the Conference, more broadly, expressed concern that the requirement would still facilitate contraceptive coverage even if an employer objects to it.

The Conference went on: "But stepping away from the particulars, we note that today's proposal continues to involve needless government intrusion in the internal governance of religious institutions, and to threaten government coercion of religious people and groups to violate their most deeply held convictions. ... The only complete solution to this religious liberty problem is for HHS to rescind the mandate of these objectionable services."

Obviously, if this GOP gambit were to pass, the president would veto it. (Right?) Let's assume, for the sake of argument, that he does. This fight for "conscience" exemptions has now been engaged not just on abortion or Plan B, but on all contraception going forward. And individual employers will join this fight for "religious liberty" now that the "consciences" of religious institutions have been given special moral standing to object to the law.

Kevin Drum wrote an excellent post this week about this subject, explaining how he had once thought that making these kinds of exeptions for religious institutions was harmless and changed his mind in recent years. Here's the essence of it:

The answer goes back a few years, to the controversy over pharmacists who refused to fill prescriptions for the morning-after pill. I was appalled: If you're a pharmacist, then you fill people's prescriptions. That's the job, full stop. If you object to filling prescriptions, then you need to find another occupation.

But of course, the entire right-wing outrage machine went into high gear over this. And it was at that point that my position shifted: if this was the direction things were going, then it was obvious that there would be no end to religious exemption arguments. The whole affair was, I thought, way over the top, and yet it got the the full-throated support of virtually every conservative pundit and talking head anyway. This was, in plain terms, simply a war on contraception.

So I changed my mind.

Yes, this is a war on contraception. And perhaps the good guys won this skirmish, which is very good for women. But the other side took some ground they didn't have before and they're holding on to it, as you can see by that statement by the Bishops. "Conscience" exemptions to Birth Control in the name of "religious liberty" are now a standard part of the political playbook. Perhaps that was inevitable, but I continue to believe that the President should have either quietly allowed the exemption in the beginning if he was going to do it or gone ahead and fought these people back on the principle once he'd made the decision. Putting up a short fight and then ostentatiously coming up with an "accommodation" may make him the only grown-up in the room, and I'm sure that's a truly terrific thing, but in the end, it empowered a group of morally suspect religious elites to continue their war on women.That's why I'm not high-fiving this the way everyone else is.

We've seen how this works in my lifetime. Here's a chart that shows public opinion on abortion rights since 1975. 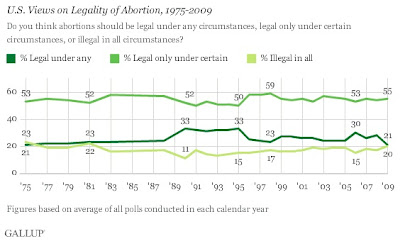 You can see that public opinion has held pretty steady for 37 years. And yet, inexplicably, abortion has gotten harder and harder to obtain and the social conservatives have turned it into a political industry. No longer do both political parties contain pro-choice and anti-choice representatives. Only one does --- the Democratic party. (We saw how that works out in practice the health care negotiations.) And I think everyone agrees that when John Roberts believes the Supreme Court has the right case, it's highly likely they will overturn Roe vs Wade. I only point this out to illustrate the public opinion is no guarantee that the reactionary right will not be successful. This is fundamental to their belief system.
I've quoted this numerous times, but it's very apropos for this discussion. From Corey Robin's The Reactionary Mind

The most profound and prophetic stance on the right has been John Adams’s. He believed: cede the field of the public, if you must, stand fast in the private. Allow men and women to become democratic citizens of the state but make sure they remain feudal subjects in the family, the factory, and the field. The priority of conservative political argument has been the maintenance of private regimes of power—even at the cost of the strength and integrity of the state.

This is the fundamental nature of the battle between enlightened liberalism and reactionary conservatism, always has been. In this case it's a very explicit battle for women. But it's not confined to women. Everyone should be concerned that this understanding of "liberty" is going to expand to allow any elite property owner whether religious or simply wealthy to opt out of community responsibility whenever it threatens their hegemony in their "private" sphere.
This isn't just about the lady parts.
.