Pole dancing: Republicans move right. And so do Democrats.

Why liberals are frustrated:

Our findings here echo those discussed in a prior post that Republicans have moved further to the right than Democrats to the left in the contemporary period. Indeed, as seen below, President Obama is the most moderate Democratic president since the end of World War II, while President George W. Bush was the most conservative president in the post-war era. 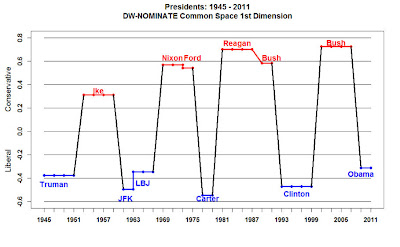 The good news is that while our politics have become more conservative our culture has become more liberal. It's an interesting dichotomy, but I think we're going to see a lot more tension now that cultural identity is becoming bound up more closely with economics. It's all changing and who knows where it's going?

Still, it's always nice to know that you aren't completely nuts. The fact is that Barack Obama is most conservative Democratic president of the modern era. And George W. Bush was the most conservative Republican. And there's a significant distance between those two conservative poles. It is what it is. Just as it seemed. And it's not good news for liberals.