Rush back to serious business

Rush back to serious business

So Rush apologized. Sort of. Well, not really.

But I particularly loved this:

Rush: I think it is absolutely absurd that during these very serious political times, we are discussing personal sexual recreational activities before members of Congress...In my monologue, I posited that it is not our business whatsoever to know what is going on in anyone's bedroom nor do I think it is a topic that should reach a Presidential level.

Yes, Rush thinks it's absurd when we are "discussing personal sexual recreational activities before members of congress." 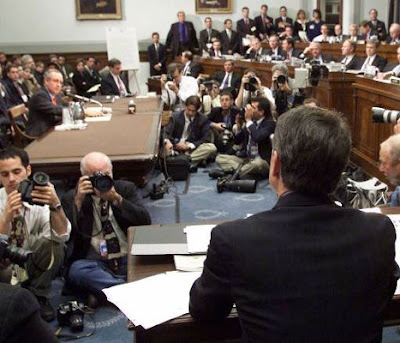 Here's the very pious Rick Santorum's statement when he voted for impeachment:

White House Counsel argues that the President did not deny before the grand jury that he had contact with Ms. Lewinsky in a manner included in the Jones definition of sexual relations. Rather, Counsel asserts that such contact did not fully satisfy the Jones definition, which requires the intent to arouse or gratify sexual desire. It is unfathomable, as a matter of common sense, White House Counsel's assertion that such physical contact occurred without any component of intent as defined under the Jones definition. Further, the President's testimony before the grand jury undermines Counsel's defense in that he actually denies any such contact during the following exchange:

Q: So touching, in your view then and now - the person being deposed touching or kissing the breast of another person would fall within the definition?

Q: And you testified that you didn't have sexual relations with Monica Lewinsky in the Jones deposition, under that definition, correct?

Therefore, I find that the President lied before the federal grand jury when he stated that he did not have certain physical contact with Ms. Lewinsky. This lie was material to the grand jury investigation into this relationship and, therefore, constitutes perjury.

And the breathless, heaving Starr Report itself, about which Rush drooled and groaned for months:

According to Ms. Lewinsky, she and the President kissed. She unbuttoned her jacket; either she unhooked her bra or he lifted her bra up; and he touched her breasts with his hands and mouth. Ms. Lewinsky testified: "I believe he took a phone call . . . and so we moved from the hallway into the back office . . . . [H]e put his hand down my pants and stimulated me manually in the genital area." While the President continued talking on the phone (Ms. Lewinsky understood that the caller was a Member of Congress or a Senator), she performed oral sex on him. He finished his call, and, a moment later, told Ms. Lewinsky to stop. In her recollection: "I told him that I wanted . . . to complete that. And he said . . . that he needed to wait until he trusted me more. And then I think he made a joke . . . that he hadn't had that in a long time."

The White House crisis has breathed new life into the programs of Rush Limbaugh and other conservative mainstays of talk radio just at a moment when the industry had been worrying that ratings for political talk shows were sagging.

"I cannot tell you how much Rush appreciates Monica Lewinsky," Limbaugh's boss, Jacor Communications Chief Executive Randy Michaels, said recently. "Although we don't have the ratings yet for 'Zippergate,' the number of people calling and saying, 'Hey, what's 'ditto' mean?' tells you how much new audience we've got on that show."

Yes, Rush is always offended by sexual talk in politics. Hates it --- just hates it.

Rush: Starting in Arlington Virginia this is Seth. Welcome sir, nice to have you on the EIB network, hello."Seth": Thank you Rush. I'm lookin' at this and I'm seeing two adults exchanging ... well, actually seven if there were six women ... exchanging pictures in a consentual way. And i guess it's none of my business. It was none of the reporter's business. It's none of anybody else's business. How is this different ... I mean you're talking about how "smart" everybody is, you talk about how smart you are every day ... but, how is this different from you going to, you know the sexual tourist destination of Dominican Republic with a bottle of viagra and having that sprayed all over the headlines? How did you like that? Why is this different?Rush: Well, but ... what you describe about me isn't true. And I guess what you're suggesting here is that getting caught having sex affairs is only stupid when Republicans do it. "Seth": No, what I said ..Rush (who by now has killed Seth's call): No, this ... you know you are, you're repeating internet rumors based in hatred and misinformation and typical brainlessness on the left. NONE of that took place. But it's people like you who present the rest of us with the greatest challenge we have in saving the country. Because general, glittering jewels of collosol ignorance like you, and your hate-filled partisanship are primarily responsible. People just like you are primarily responsible for the precarious poisition this great nation finds itself in. Because you can't be counted on for genuine, decent citizenship. You can't be counted on to protect this country when it's under assault internally. You seek your jollies in false victories over your political enemies while your country is in the process of going down in flames. Its people like you that try to make excuses for reprobates like Weiner, and Clinton and so forth while immersing yourself in lies to make yourself feel good that present a problem for the rest of us. Feel sorry for ya. You're probably capable of much more than you're immersing yourself in. I gotta take a brief time out, we'll come back, we'll continue ... right after this.