Here in the very heart of hateful godless liberalism, every Sunday Veterans for Peace creates what is known as Arlington West at Santa Monica Beach: 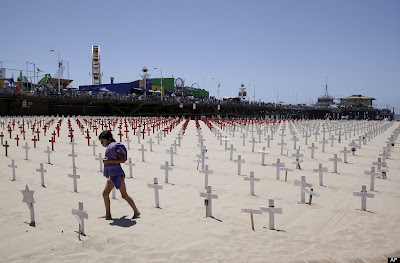 Each Sunday from sunrise to sunset, a temporary memorial appears next to the world-famous pier at Santa Monica, California. This memorial, known as Arlington West, a project of Veterans For Peace, offers visitors a graceful, visually and emotionally powerful, place for reflection.

In accordance with the Veterans For Peace Statement of Purpose, the Arlington West Mission Statement is to remember the fallen and wounded to provide a place to grieve to acknowledge the human cost of war to encourage dialogue among people with varied points of view to educate the public about the needs of those returning from war.

To take in the full expanse of crosses, one stands breathless at the enormity of what one sees. Each cross, carefully positioned in the sand with a uniformity appropriate a memorial for this purpose, represents all American military personnel who've lost their lives in the US war and occupation of Iraq and Afghanistan. Upon deeper reflection, Arlington West also powerfully represents the path our country has embarked upon.

When one visits the Arlington West Memorial at Santa Monica, one will see mementos placed on some of the crosses, many with fresh cut flowers. Arlington West also represents those who've lost their loved one or close friend.

In celebration of their lives, family and close friends of the fallen write their own heartfelt words and dedicate these to their loved one. A gold star is placed by us on dedications made by those who are family. Those dedications made by a friend or those who served along side an individual, will have a silver star placed on their dedication.

A Sea of Crosses

As one stands looking out over the sea of crosses, one will notice a swath of red crosses standing among the white ones. As the numbers of American lives lost increases daily, one red cross is representative of 10 military personnel each.

For those who've lost their lives within the week past are flag draped coffins with blue crosses positioned in front of each of these. The cross was chosen for its simplicity, not for its religious connotation.

The “wall” of names has been replaced with pillars positioned where the public can review the frequently updated list of fallen American military personnel since day one of the U.S. invasion and occupation of Iraq and Afghanistan. The list contains the name, age, rank, branch of service, unit assigned to, date and place of the circumstance of death, as well as their hometown and state.

Rather than address the root cause of the high rate of suicide among military personnel - that being military conditioning to accept the carnage and violence of war as acceptable and healthy to defend the American Way Of Life - the military's response is to sedate them with psytropic medications and simply re-deploy them into combat.

That there have been thousands (upwards of 1 million or more by some statistics) of innocent people who've lost their lives in the violence of the invasion and occupation is without question. As Veterans For Peace, we also acknowledge there are innocent people on the receiving end of our benevolent bombings that did not live to experience the liberty and freedom we brought with them.

On this Memorial Day, Veterans For Peace asks you to mourn not only for Americans killed in battle, but also for those killed by Americans in battle. We ask you to be willing to accept the fact that these war deaths did not have to happen—that they are actually in vain. Hundreds of thousands of innocent people have died in American wars of aggression. That is a tragedy and is a truth that must be accepted and for which we must take responsibility.

Weather permitting, we will set up the memorial beginning on Saturday, May 26th at 8am with a candle light vigil placed at the base of each marker at dusk on Sunday. Take down of the memorial will commence of Monday, May 28th around 3pm. The public is welcome to volunteer for set up and or take down. Please introduce yourself at the information table for guidance on procedures and protocols observed within the memorial and its artifacts.

(Note: Leah Bolger spent 20 years on active duty in the U.S. Navy and retired in 2000 at the rank of Commander. She is currently a full-time peace activist and serves as the National President of Veterans For Peace.)

I hear complaints that this memorial is unpatriotic because it is affiliated with a group that opposes these wars. We don't seem able to discuss these things with any complexity or nuance anymore. But I walk by it frequently on Sundays and I always see a few people sitting quietly by the crosses, perhaps even a family member or a friend of the fallen. And they don't seem to be upset. In fact, I've never known anyone who isn't moved by the sight of it: 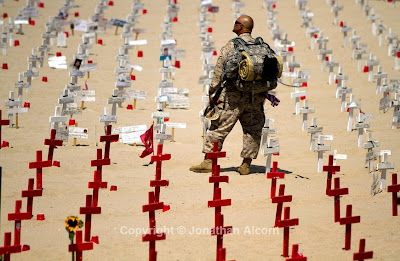 And every time I go by there I'm always struck by how much bigger it's gotten since the last time: 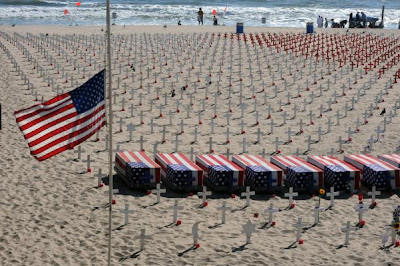