"Actually, in reality, work is my life..."
by digby
Last Tuesday night, when we all finally knew that Wisconsin Governor Scott Walker had successfully beaten back his recall elections, the first Republican tweet I saw come through my twitter feed was this one: 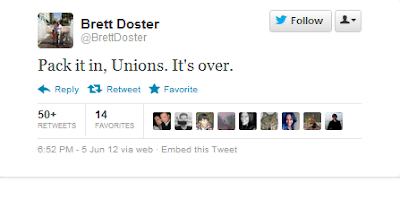 That tweet was followed by the usual excessive conservative gloating and massive liberal despair as it became clear that Wisconsin was an even bigger loss than anyone had anticipated. And as the days went by, just about everyone declared the end of the union movement in one way or another, offering all manner of criticisms and observations, much of it interesting, a lot of it depressing.

Corey Robin responded by asking liberal critics to try to imagine how hard it is to organize in the workplace, which made me look back at my own career and realize just how difficult it must be, especially in large companies. Corporate life is built around individual competition with workers explicitly being pitted against each other for money, status and recognition. "Productivity" is gained by constantly expecting more for the same money and holding out the possibility that your extra work will be rewarded with entry into the executive suite (or maybe just a raise.) It's almost impossible for me to imagine being able to organize even the most exploited office workers despite the fact that they are all being screwed. People are afraid to lose their jobs, of course, probably more so today than in any recent period. But they are equally afraid to lose their futures, the possibility of advancement, prestige and yes, real money.

I experienced this a little bit in the early days of raised consciousness around sexual harrasment, in the wake of the Anita Hill and Clarence Thomas hearings. (If you watch Mad Men then you have some idea of what it was like for women in offices in the bad old days. If anything, it was even worse during the 70s and 80s, after the sexual revolution.) We had a seriously deranged harasser in a very senior position and one of the office assistants filed a formal complaint. The reaction was was brutal and she ended up quitting over it (amidst lots of whispering about what a bitch she was for being so sensitive.)

What does this have to do with organizing a workplace? Not whole lot except that it was clear from the beginning that there wasn't a bit of solidarity even among the victims beyond some sisterly gossip over drinks during the saga, much of which was later passed on to the bosses. Let's just say that I wouldn't have wanted to try to organize even that workplace, where the common behavior of some of the bosses was disgusting and the workers all clearly and immediately stood to gain by it stopping. It just wasn't in the vocabulary. (Fear of litigation made the difference in the end.)

So where are we really? Rich Yeselson persuasively argues that the problem has been decades in the making as unions slowly but surely lost their power, but also their place in the popular imagination. As fewer and fewer people belonged to unions, they forgot what they were, much less what they were good for.

It’s this head scratching perplexity about the very point of unions—not the corporate and rightwing anti-labor rage, which is eternal—that is snuffing unions out like the air. Decline has begot decline in an endless feedback loop—the workers don’t have familial or community links to unions anymore and, thus, do not think unions are, even potentially central to their lives; the middle class professionals and writers aren’t, via the genuine power of a Hoffa or Reuther and their membership, exposed to a culture of union power anymore; and the politicians aren’t nearly as dependent on the money and votes of union members.

He points out that this question of why people don't form unions isn't a new one and relates an anecdote from 30 years ago that echoes the complaint from this correspondent of Josh Marshall's in the wake of the Wisconsin vote:

[I]t is also difficult for me to feel much sympathy or even understand Unions. I received a degree in Finance, Insurance and Real Estate in 1987, and have been in Sales and Marketing for most of the last 25 years in the Tech and CE sector.

I don’t want to demonize School teachers, and I am sure it must be a tougher job than I think. But over the last 10 years, I have taken a full 1 week off for vacation a grand total of 4 times. I take a day here and a day there, but if I am lucky it will work out to 2 weeks per year, usually less. Then there is the ever present e-mail, texts and phone calls that intrude into my evenings and weekends. Teachers get that much time off around Christmas time.

On my Son’s little league team, one of his teammates father was a teacher in the LAUSD. He told me that he wouldn’t know what to do if he had to work in the summertime. Really? I’ve only been doing it for a quarter century. But I do see his point, working has put a bit of a crimp in my life. Especially in the summertime. Actually, in reality, work is my life...

So I think there is a preception that the pay for teachers isn’t great, but not terrible either. But great benefits, a chance for a decent to good retirement, and it seems a bit like, if not a part time job, certainly not a full time job in any sense that I would recognize it. And pretty much limited accountability.

Public Safety Unions I precieve to be much tougher, and stressful jobs. But oh lord, the motherload of great pay, great benefits, high degree of public respect. Retiring at age 50 or earlier seems a little ridiculous though, especially given the gold plated retirement package.

This fellow has a genuine gripe, no doubt about it. Many jobs suck and it sounds as though he is working harder for less money and isn't happy about it. I feel for him. But considering all the reasons why that is, why does he resent those who have secured better working conditions through the unions?

He didn't say explicitly that he's mad because they are paid through taxes and are therefore doing well at his expense, but I'd guess that when you drill down that's part of it. Still, he describes himself as a man of the left so I don't know that this is about government and taxes nd the usual constellation of right wing concerns. More likely, and from the tone of his note, he seems to feel that it's just generally unfair that some people have these secure, humane, well paid jobs and he doesn't. And he's right! Everyone should have them. (And there are quite a few places in the world where they do. Just not here.) So why not see it from that perspective instead of feeling resentment toward those who have managed a better deal? That's the big question everyone's asking themselves, I guess.

We know that it's hard to organize workplaces and we know that most people no longer know what a union is, much less think it can do anything for them. But from where I sit, the real problem is that corporate values have filled the void, with ruthless competition, no job security --- all holding out the false promise that the "best" and "hardest working" will rise to the top. In fact, our whole "exceptional" culture with its fetish for individualism and competition (fed constantly by corporate propaganda) works against the idea that we are in anything together. We don't even have enough of a sense of community anymore to require people not to kill each other when it can be avoided.
Meanwhile, what's really happening is that people's working lives are getting worse and it's enervating and soul destroying. And perhaps the greater the social and economic distance between the 1% and the workers, the less likely the workers, perversely, resent them. Maybe they see them as exotic creatures from some far off land, not even human. (Those lazy schoolteachers, on the other hand, have got it way too good ...)
And I suppose that once you realize you aren't going to make it all the way to the top (and apparently there is no top unless you're Charles and David Koch) you just want to be able to have a life. If you can't even have that then the only thing left is to insure that nobody else does either. It's not the most edifying characteristic of human nature, but it's definitely one of the strongest.

Yeselson winds his piece up with this melancholy observation:

There has never been an advanced capitalist country with as weakened and small a union movement as today’s United States. (There are very few union members in France, for example, but French unions still have the vast majority of the workforce under union contract.) And according to academic evidence cited in Tim Noah’s recent book The Great Divergence, which Nocera uses as the occasion for his column (and which I reviewed in The American Prospect), the decline of the labor movement is one of the primary causes of American income and wealth inequality, particularly among male workers.

If conservative politicians and their wealthy supporters can replicate Walker’s project in other states, the public sector unions will wither as the private sectors unions already have. If so, I predict that many Americans clueless about unions today may grow to regret losing a world they barely knew existed.

As long as they can keep us fighting each other for fewer and fewer scraps, we won't have much time to think about it.