Here we have a US Senator saying that the tax system is set up as a game and more power to those who know how to play it.

"As long as it was legal, I'm OK with it," Graham said. "I don't blame anybody for using the tax code to their advantage. I blame us for having it so complicated and confused. Pick a rate and make people pay it."

In the meantime, anything within the rules goes, he argued.

"It's a game we play," Graham said. "Every American tries to find the way to get the most deductions they can. I see nothing wrong with playing the game because we set it up to be a game."

But here's the thing. It didn't used to be considered ethical to "game" the system just because you could. Yes there have always been game players. But leaders and statesmen were not supposed to be among them. Indeed, until recently "game players" were held in disrepute.

Here, let me give you an example of someone who didn't play games, a man named George: 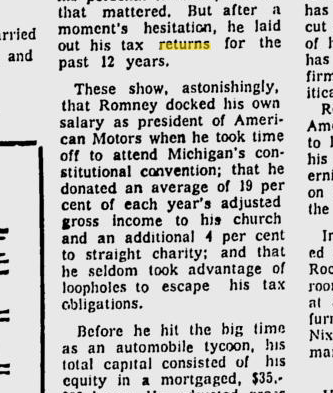 That's a clip from a Drew Pearson column in 1968. George Romney was an honest man who gave a lot of money to his church and charity but refused to take advantage of many loopholes in the tax code just because he could. Today that's considered naive. If there's no law against it, by God, then no reason for me not to do it. But it didn't used to be that way. There were people who believed that it was wrong to "play games" and felt it was a matter of personal integrity to do the right thing. Lots of them. These were the straight arrows, the pillars of their communities, the ones who the people looked up to and used as examples for their kids.
(For all I know many of them were immoral creeps at heart and only did it because they feared the social disapprobation. But it doesn't matter why they did it. It was a cultural norm that people adhered to because we all agreed that it was wrong for our leaders to be greedy and venal "game players." Who would trust a person like that?)

This is what's interesting about looking at norms. It's the difference between respecting the spirit of the law (or rule) and only responding to the letter. We can't really function as a society if we have to make explicit laws and rules for everything. Civilization depends upon citizens agreeing to certain modes of behavior, not just adhering to rules because they'll run afoul of authorities. There are not enough policemen in the world to keep the whole population in line.

And if you cannot count on the leaders at the top to have some sense of ethical boundaries beyond explicit legal constraints, you have a problem and a big one. We're already dealing with the fallout from our elastic definition of war since 9/11 and the stretching of norms that came during the torture regime. (Today it's, "well, assassinations are better than torture, right? Killing happens in war all the time.") Now we're seeing a presidential candidate and his supporters babble like Wall Street pirates about the tax system being a "game" (with the winners presumably being the ones who can get away with paying the least.) This is the sickness at the core of elite American life. The winners are, by definition, the ones who get away with the most.

It appears that Mitt Romney is getting away with hiding hundreds of millions of dollars. We don't know whether it's legal because he refuses to open his records to the public for examination. But even if it isn't, the fact remains that it's unethical for a person not to pay a fair share of taxes, especially when he has hundreds of millions of dollars, more money than he can spend in a lifetime. That's just wrong. And certainly someone who wants to be president of a country full of middle class and lower income folks who mostly do just that, should be a straight arrow and do the right thing, not "play games" with the system.

It's quite astonishing when you think about it that a man running for high office did nothing to even try to create the illusion that he's an upstanding citizen who would never take advantage of the system. It says a lot about America that a presidential candidate figured the public wouldn't care. Are we really so far gone that we don't expect any better of our leaders than this?