When Corporate Sponsors Leave ALEC and Rush. What We Learn by @spockosbrain

When Corporate Sponsors Leave ALEC and Rush. What We Learn  by Spocko

The other day Google announced it will be leaving ALEC. "Google becomes latest company to abandon right-wing ALEC."

This is a big deal. It comes on the heels of a number of other corporations like Microsoft, Google, Facebook and Yahoo! having left ALEC. 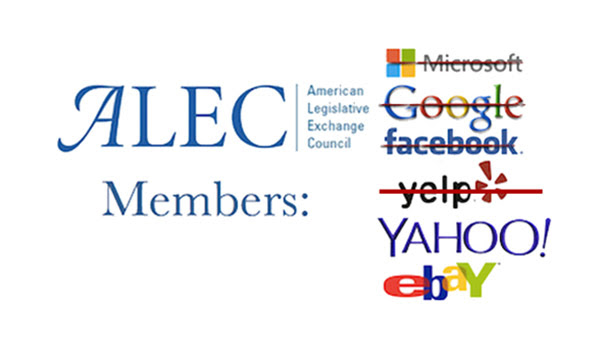 These things don't just happen magically. There are a lot of people who have worked very hard to make that happen. Here is a list of just some of them from the letter they sent to the Google folks earlier this month.

I don't know all the people behind those groups, although I can personally point to my friends at both the Center for Media and Democracy for their steller Alex Exposed work, and my friends at Color of Change, who earlier got corporations to peel off ALEC following the Trayvon Martin shooting.

I think it's important to acknowledge this success and see what we can learn from it.  Like the actions used to get advertisers to leave Rush Limbaugh, Glenn Beck and other RW radio hosts, part of this is educating sponsors and advertisers about the person or entity's comments and actions so people can decide they don't want to taint their brand with the association.

We often think that if we just give people the facts they will make the right decision. That does apply in some cases, especially when dealing with Vulcans. Other times we think people only make decisions to maximize revenue, and that's true when dealing with Ferengi. But humans are more complex, and we need to look at and combine multiple methods to persuade, convince or pressure.

I listened to the Diane Rhem show where Eric Schmidt talked about ALEC. Here is his actual ALEC comment: (emphasis mine)

KRISTEN
I'm curious to know if Google is still supporting ALEC, which is that fund lobbyist in D.C. that are funding climate change deniers.

SCHMIDT
We funded them as part of a political game for something unrelated. I think the consensus within the company was that that was sort of a mistake. And so we're trying to not do that in the future.

REHM
And how did you get involved with them in the first place? And were you then disappointed in what you saw?

SCHMIDT
Well, the company has a very strong view that we should make decisions in politics based on facts. What a shock. And the facts of climate change are not in question anymore. Everyone understands climate change is occurring. And the people who oppose it are really hurting our children and our grandchildren and making the world a much worse place. And so we should not be aligned with such people. They're just literally lying.

This comment is great, but for us to learn something about why efforts to use the Spocko Method to alert advertisers and sponsors works, it helps to listen to other parts of the show.

REHM
That’s great. Is it different when you're thinking about millennials? Are they perhaps more open to the kinds of ideas that Google has come to stand for?

SCHMIDT
Certainly, the millennials that we recruit, hire and so forth, in every way, they seem better than my generation. They're better prepared, they're better educated, they're more collaborative than my generation and they're more socially conscious. They don't want to spend their time working for the man in some cog in a wheel doing one task. They want to feel that there's a social purpose to what they're doing, that they're improving the world in some way.

SCHMIDT
And, indeed, you'll look in tech companies, many of them have very sophisticated corporate responsibility programs or branding around trying to help. And that's as much to keep the employees motivated as it is for good customer relationships.

Now I know Eric, and have worked with him and Google before, so I know that what he is saying is accurate for Google. But it also applies to people in lots of other companies.

What tipped Google over the edge into leaving ALEC? I don't know exactly, but his answers give us clues. The lying, the hurting children and grandchildren are a big part of it. Then the key phrase, "we should not be aligned with such people."

The lying part goes against the "fact-based decision making" model you might expect from a science/engineering/computer company. But you also see how personal, emotional and other values come into the decision.


If you did some reading (or listen to NPR) you would know that Eric and Wendy Schmidt started the Schmidt Family Foundation whose webpage says,


Our vision is a heralthy, vibrant society that values functioning ecosystems, active civic engagement and equity for all.

In addition, Wendy was a founding member of Climate Central  "... an organization that combines an expert media team with the work of experts using the newest science to measure and describe climate change."

CEOs aren't always the final decider, but when you can line up multiple reasons ranging from financial through emotional and into brand image they can be convinced to take a different course of action.

ALEC and Rush appeal to people's most selfish impulses. They use greed, fear and ignorance to get what they want. They want us to believe that everyone thinks like they do, when in fact it is a self-selected minority that holds these beliefs. They say if you only believe them, you will be among society's winners.

But when we go to the interested third parties and educate them, many of those real winners are disgusted with what they hear. Combining that education with appeals to both personal and stated corporate values systems and you have a solid package to help them decide to walk away.

If you want to convince people within the corporate form to walk away from a right wing media personality or a right wing legislation bill mill, learn who they are, what they say their company is about and ALL the things that they care about. We have lots of ways to find that out now, just Google them.