Them boys ain't goin' gentle into that good Knight by @BloggersRUs

Them boys ain't goin' gentle into that good Knight

You knew it was coming as soon as calls to remove Confederate battle flags caught fire across the South starting in Columbia, SC:

The Ku Klux Klan has been approved to hold a protest rally at the Statehouse next month against removing the Confederate battle flag, with the group calling accused mass murderer Dylann Roof a “young warrior.”

The Loyal White Knights of the Ku Klux Klan applied for the permit last week to hold a rally for 100 to 200 people on July 18 on the north side of the Statehouse.

If you are holding your breath for Fox News' Griff Jenkins to cover the Klan rally live just to remind us all that racism is dead and only racists and race baiters say otherwise, don't.

Calling itself the “Largest Klan in America,” the Loyal White Knights of the Ku Klux Klan are based in Pelham, N.C., according to the group’s website.

A man identifying himself as the “great titan” of the N.C. chapter of the Loyal White Knights left a message with The State saying his group is holding the demonstration because “to us they are erasing white history and white culture right out of the history books. That’s why they want to take that flag down.”

Violent insurrection ending in what Southerners in other circumstances call an ass whuppin' (followed by decades of Jim Crow, domestic terrorism, and thousands of lynchings) is the heritage some here are most proud of and remember with Confederate battle flags. Of 400 years of history on these shores, the 4 years of violent treason are the ones by which some Southerners still define themselves. This makes them a very special breed of 1%-er. As John Fugelsang put it in the video I linked to the other day, it is "a heritage of quitting America because you want to start your own country to keep people as pets."

South Carolina state senator Paul Thurmond (yes, son of the famous Dixiecrat/Republican) spoke to WBUR in Boston about his speech outlining his decision to support removing the flag from the state capital grounds. Thurmond thinks it is the right thing to do. It is "a symbol of hatred that needs to be brought down.” Thurmond is worried about his safety.

The boys were out over the weekend celebrating their heritage with Confederate flags flown from the backs of their pickup trucks. At my SC hotel last night, a guy just finishing fixing a flat on his truck stuck a Confederate flag onto the left rear, as in this picture a friend shot in Marion, NC. 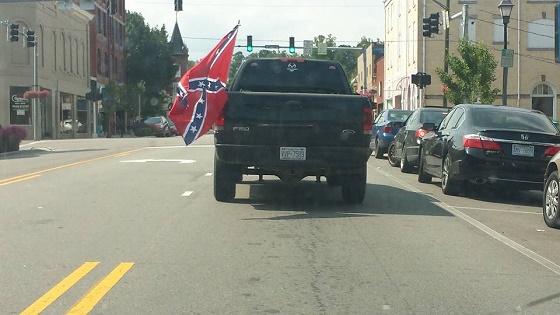 A reporter in Asheville spoke with an eighteen year-old kid doing the same:

We were talking about the reaction he's gotten flying the battle flag, and Billingsley said it's been overwhelmingly positive — lots of honks, thumbs-up, and more than 600 likes on a Facebook page.

"I've only had one negative, and it was a colored looking at me," Billingsley said. "He made it look racist, but it's really him being racist by judging me for flying it."

Congratulations, Fox News. Mission accomplished. Mr. "I know you are, but what am I?" is America's future.

Thurmond is probably right to worry about his safety, judging by the driving prowess the Southern Pride faction showed over the weekend in Dalton, GA: