And they're off! by @BloggersRUs 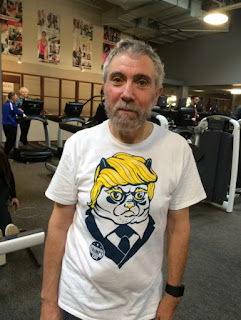 The New Hampshire primary is underway. They have already hand counted the nine paper ballots in Dixville Notch. And it seems as if Paul Krugman will be tweeting the New Hampshire primary. There's a metaphor in there somewhere, but as with significance of the Dixville totals, it escapes me. Bernie Sanders jumped out to an early lead. Surprised?

For Republicans, New Hamphire is a race for second place.

Charles Blow this morning notes a key difference between the Clinton and Sanders campaigns. Sanders has energized younger voters while at a Clinton event Blow attended in New Hampshire there were "more heads of white hair in that room than a jar of cotton balls." The problem with Clinton and younger voters is, as someone on social media commented, "Clinton is running an I-Have-Half-A-Dream campaign." Blow writes:

Young folks are facing a warming planet, exploding student debt, stunted mobility, stagnant wages and the increasing corporatization of the country due in part to the increasing consolidation of wealth and the impact of that wealth on American institutions.

Young folks are staring down a barrel and they want to put a flower in it, or conversely, smash it to bits. And they’re angry at those who came before them for doing too little, too late. They want a dramatic correction, and they want it now.

They want their shot at a 1960s social upheaval. The problem is Clinton's message is, "I have more modest ambitions, but they are more realistic." The problem with Sanders, writes Blow, is he is better at setting goals than achieving them.

A problem both face, Jamil Smith wrote last week at the New Republic, is that while both largely agree on issues, there is a glaring gap in focus on voting rights. Sanders could win over more minority voters if he worked harder at filling that gap:

While Sanders and Clinton now see eye to eye on abortion and reproductive access, he has effectively ceded that issue to the Democratic frontrunner with his own sluggishness on the call for a Hyde repeal and her endorsements by Planned Parenthood and NARAL Pro-Choice America. But just as Clinton has placed a heat lamp over the issue of environmental racism in this campaign by seizing the Flint water crisis issue (including a planned trip there on Sunday), Sanders can and should do the same for voting rights.

Economic reforms and Wall Street prosecutions mean a great deal to black and Latino Americans, surely, especially to those who have been foreclosed upon or otherwise left behind in the Obama recovery. But Sanders has not shown yet a full grasp that there are issues involving racial and gender inequality that do not hew so closely to economics. Doing so would be a good first step for Sanders towards a more intersectional campaign. He needs to more effectively address issues that are particularly important to communities of color through their lens on American life, not his.

I think that's right. Otherwise, Sanders cedes ground on minority rights issues as well as on women's rights. Women's rights, minority rights, and voting rights are (for me) what are most at stake in this election, especially with Supreme Court picks on the line. Economic inequality matters, but fixing it will go nowhere without the votes to make it happen. If Sanders' revolution is to be triggered by November voting, a little more focus on voting itself is in order. From Hillary Clinton's campaign as well.

The beauty of Sanders' appeal to date is that his message is "pretty darn simple, as a Clinton supporter observed. If only life in America were that simple.