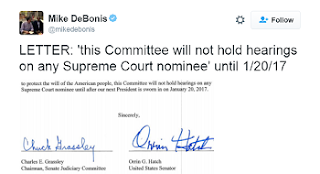 The sooner America legalizes marijuana and collectively lights one up, the better. At the risk of sounding as if I did at this early hour, let's look at the some of the lunatics running the asylum.

It is an article of the one, true, conservative faith that government must be run "like a business." NC Gov. Pat McCrory and the state of North Carolina have a state Supreme Court date in May to settle whether an ALEC-inspired legislature can abscond with a city's water system and turn it over to a regional authority — the first step, some believe, on the road to privatizing the public water supply's operation and/or ownership. The experience of Flint, Michigan is sure to come up. So how'd that work out for Michigan Gov. Rick Snyder? A former adviser explains (emphasis mine):

Dennis Schornack, who retired after serving more than three years as a senior adviser on transportation issues to Snyder during his first term, is the first current or former Snyder official to directly criticize the governor and his management style for contributing to the public health crisis.

Schornack said he still believes Snyder is an intelligent leader and "basically a good guy." But, he said, decisions about Flint’s drinking water should have been dictated by science instead of finances and the bottom line.

"It's sort of a single dimension for decision making; thinking that if it can't be solved on a spreadsheet, it can't be solved," Schornack said in a telephone interview from Florida. He earlier served 12 years as a senior policy adviser to Republican Gov. John Engler and in between served six years on the International Joint Commission.

“Government is not a business ... and it cannot be run like one,” Schornack said. “The people of Flint got stuck on the losing end of decisions driven by spreadsheets instead of water quality and public health. Having been a Snyder staffer, luckily in a spreadsheet-rich area like transportation, I lived the culture amidst its faults.”

After stamping their feet, then waffling, then stamping their feet some more, Republican leaders in the Senate are all in on denying a hearing to any replacement Supreme Court Justice from President Obama. Public opinion is firmly on the president's side. No matter. Forward into the breach:

Majority Leader Mitch McConnell said the Senate will not hold hearings or vote on any nominee to replace long-serving conservative Justice Antonin Scalia until after the next president takes office next January. Scalia died on Feb. 13.

McConnell, a Republican nemesis of Obama during the president's seven years in office, said he even would refuse the standard courtesy of meeting with whomever Obama chooses. Under the U.S. Constitution, the Senate has the power to confirm or reject a president's Supreme Court selection.

With the U.S. presidential election looming on Nov. 8, Republicans were aiming to allow the next president to fill Scalia's vacancy, hoping a Republican will be elected.

Yeah, good luck with that. And should they lose? Lather. Rinse. Repeat.

Charlie Pierce gives Obama some advice on on his next steps:

He finds the most ridiculously qualified candidate he can find among whatever demographic or social group is most disadvantageous to the Republicans, and he puts that candidate up as quickly as possible. He does event after event, with the candidate by his side. He campaigns for Senate candidates in New Hampshire, Pennsylvania, Ohio, Wisconsin, and Illinois, all places with vulnerable Republican incumbents, and he brings the nominee along with him.

Our old friend, voter-fraud fraudster Hans Von Spakovsky, believes the dead should still be able to vote in the case of Antonin Scalia (IOKIYAR).

Donald Trump won the Nevada caucuses last night. No surprise. Except when Trump crashed a speech Glenn Beck gave on behalf of Ted Cruz. Trump gave one of his own.

Republican voters are not behaving as expected in the primary contests. "This is an electorate that does not care about what it is supposed to do," writes Philip Bump. What's driving Republican primary voters? Fear. So what's new?

President Obama sent Congress a proposal yesterday for closing down the prison at Guantanamo Bay, Cuba. Republicans reacted as you might expect:

ICYMI this is what I think about @POTUS' plan to close #GITMO & send terrorists to the U.S. pic.twitter.com/5ceyu5I2tc

Finally, seeing America in distress, our neighbors to the north announce their Canadacy:

They may have something there.