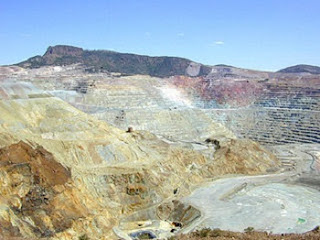 The Chino open-pit copper mine near Silver City, New Mexico
Photo by Marshman [GFDL or CC-BY-SA-3.0], via Wikimedia Commons

Dylan Ratigan's August 2011 on-camera meltdown is as close as reality has ever come to Howard Beale's Network rant remembered in Digby's sidebar.

What made it a powerful moment was he was right:

Tens of trillions of dollars are being extracted from the United States of America. Democrats aren’t doing it, republicans aren’t doing it, an entire integrated system, banking, trade and taxation, created by both parties over a period of two decades is at work on our entire country right now.

Elias Isquith at Salon this morning interviews Les Leopold, Labor Institute executive director and president, about his new book “Runaway Inequality: An Activist’s Guide to Economic Justice.” Ratigan called what is happening "being extracted." Leopold calls it “financial strip mining,” and a far cry from what free marketeers and neoliberals taught would happen from lower taxes and fewer regulations:

What they didn’t teach us and what they never discussed is that it’s one thing to deregulate trucking or airlines or telecommunications, but it’s quite another thing to deregulate the financial sector. When they started deregulating the financial sector, it put in motion something that we refer to as “financial strip mining.” It’s an incredible, insidious process. It started with a lot of corporate raids – we know call them hedge funds, takeovers, private equity companies – financiers who use a little bit of their own money, borrow a huge amount of money, and start buying up companies. In the deregulated atmosphere they bought up thousands of them over time. The debt that was accumulated to do that was basically put on the company. It’s a little bit like if you went out and bought a car with a loan, instead of you paying back the loan the car pays back the loan. That’s what they were doing.

Then we started paying CEOs with stock options and the whole thing went to hell.

There was a rule change in 1982, under Reagan. A guy who was the former Head of E.F. Hutton became head of the Securities and Exchange Commission, and he changed the rule about companies buying back their own shares. Before 1982, it was virtually illegal to do that because it was considered stock manipulation. When a company buys back its own shares, it reduces the number of share owners, and therefore every share is worth a little bit more. If you do this, all things being equal, you’re going to boost the share and manipulate the price. The free market’s not doing it, you’re doing it. This guy thought, “Well that’s very efficient. Anyway, competition will even all of that out.”

CEOs and their corporate raider Wall Street partners are thinking, “Oh, this is fantastic. Let’s use the company’s money to raise the price of the share, and then we can cash in on our stock incentives. The outside investors can cash in and leave, ‘pump and dump.’ This is great.”

Build a better mousetrap? Why bother with that or R&D when you can goose the stock value by buying back company stock. Whine about the high corporate tax rate. Insist that a tax repatriation holiday that brings back corporate monies stashed in the Caymans will got to R&D and investment, then use the windfall to simply buy back more stock (as happened under Bush II). Capitalism started eating itself and America with it.

What I call the Midas Cult, Leopold calls the "Better Business Climate" that took hold in the late 1970s and overturned the postwar model:

The philosophy at that point was basically “retain and reinvest.” CEOs viewed stakeholders as labor, community and their shareholders. It wasn’t that shareholders were somehow in there for the share price over everything else. Once this Better Business Climate model hit, you look at these same two lines and they just split apart. Worker wages actually go down in terms of real buying power. The gap between the two lines today is so large that if worker wages stayed on that productivity line that they taught us was an iron law, which of course they then repealed as soon as I graduated, if the two lines kept going up together the average weekly wage would be double what it is today. That’s how big a gap took place. Something really big changed.

It is not simply the financialization of the economy that has taken place, but a poisoning of minds and the emergence of homo corporatus, with a spreadsheet for a mind and gold where a heart used to be. Even the victims of the "Better Business Climate" have adopted its values, as if the bottom line is the measure of all things. And they don't even know it. But they can feel it, and that it is wrong.

We have truly lost our way That is why the anti-establishment sentiment in an electorate poised to burn it down and break out the guillotines. Here again is Ratigan's rant.