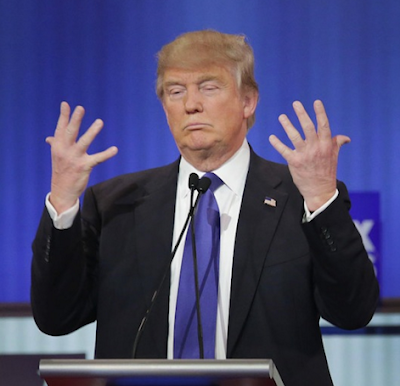 Yes, I wrote about it today for Salon. Sadly, it's not going to be over soon regardless of who wins.

So here we are on Semi-Super Tuesday. The GOP nomination looks to be coming closer to my personal prediction of a Trump/Cruz race, but there is still plenty of room for the Romney Gambit to succeed.
(For those not following it all that closely, the Romney Gambit was supposed to be Senator Marco Rubio winning the big home state of Florida, Governor John Kasich winning his big home state of Ohio and the combination hopefully denying Trump enough delegates to win on the first  ballot at the convention.)
It doesn’t look as if Rubio is going to be able to fulfill his end of the bargain. Trump is so far ahead in Florida he abandoned it and planted himself in Ohio over the last few days where Governor Kasich has been showing a lead. Everyone assumes that Trump will come out ahead tonight, perhaps by quite a lot, but there is still more than one road to the nomination and it’s not yet settled.
Nate Cohn of the New York Times explains the state of play:

[T]he party has ruled that states holding their primaries on March 15 and later are allowed to award their delegates on a winner-take-all basis. Two of the largest states voting on Tuesday have chosen to do this: Florida and Ohio. Whether Mr. Trump can win the 1,237 delegates necessary to avoid a contested convention could easily turn on whether he can win one or both of these states.

So far, Mr. Trump has won about 42 percent of delegates — a share that has offered some consolation to his beleaguered opponents. But going forward, Mr. Trump could easily win 60 percent of the remaining delegates between now and June — enough to win the nomination — without doing any better than he has done so far.

Consider last Tuesday’s contest in Michigan. Mr. Trump won by a margin of 37 to 25 percent over Ted Cruz, enough to claim 42 percent of the delegates. That same margin would have given Mr. Trump all of the delegates if Michigan had winner-take-all rules, or 80 percent of the delegates if it were a winner-take-all system by congressional district. The district system is used by some big states coming up, like California, Indiana, Wisconsin, Maryland and Missouri. The last is one of the five states holding a contest on Tuesday.

On the other hand, according to  polling expert Sam Wang, a Kasich win may just be what the doctor ordered.

[The] scenario, in which Rubio drops out and Kasich stays in, may be Trump’s best option. Perhaps counterintuitively, it is worse for Trump to win Ohio since that would likely cause Kasich to withdraw. In this scenario, Trump would be left in a one-on-one matchup with Cruz. National surveys from ABC/Langer and NBC/Wall Street Journal show Cruz leading Trump by 13 and 17 percentage points. A two-candidate race might not only leave Trump far short of a majority of delegates but also open up the possibility of Cruz ending up with the most delegates.

Even in this two-candidate scenario, Trump still has a shot at the nomination. Despite his record of racist, sexist, and inflammatory statements, culminating in the proto-fascism and violence of his rallies, many Republicans regard him as the lesser of available evils. Some Republican insiders see the ascendancy of Cruz as more damaging to their party in the long run.

We are therefore left with an odd situation. Many Republicans who oppose Trump and Cruz are desperately hoping for Kasich to win Ohio, an outcome that Kasich himself certainly wants so that he can stay in the race. But Trump also should hope Kasich wins Ohio, since a decision by Kasich to keep fighting keeps the field divided, offering Trump himself the best chance of getting a majority of delegates and ultimately winning the nomination.

Both of those articles, as well as this rundown by Harry Enten at Five Thirty Eight, will tell you more than you ever wanted to know about the GOP primary rules, delegate math and various paths to the nomination.
In case you were wondering if Trump’s condoning and celebration of violence over the past couple of days has changed the trajectory of the polls, it has — in his favor.
Monmouth University was in the middle of polling when the events of last Friday night in Chicago took place, and they asked GOP respondents if it affected their views of Trump; 88 percent said it either didn’t change their minds or made them like him more. For every one person who was repelled, two viewed Trump more favorably. If he does well tonight, it’s possible that it will be because the Trump campaign’s violence and potential for mayhem was partly responsible. That’s something to ponder, isn’t it?
Last night on Fox news, the right-wing rationalization of these events was already in full flower, with none other than Newt Gingrich leading the charge.  He explained to Sean Hannity that the violence at the rallies has all been perpetrated by “left-wing fascists,” and that it was “frankly disturbed that people are blaming Trump.” Hannity agreed and pointed put that “Soros-funded” groups like Move On had been orchestrating protests throughout the campaign. So Hannity and Gingrich have it all figured out.
As I predicted, members of the establishment are starting to come around. This is mostly because they’ve seen the writing on the wall (just ask Roger Ailes), but it’s also a reflexive reaction to being accused of bad deeds. They simply turn it around on “the left” and say they had no choice but to defend themselves.
But whether Trump more or less wraps it up tomorrow or the drama goes all the way to the convention, our democracy has already been damaged. We won’t know for some time just how badly. As political scientist Brendan Nyhan explained in a series of tweets last night, there is likely to be some moderation in Trump’s rhetoric and actions but that will not change the fact that something very dangerous has already happened.
Nyhan points out that we have known for decades that there is a subset of people who “have authoritarian tendencies and that hatred toward outgroups is often widespread.” And he expresses shock that so few elites are “defending the norms of public debate and restraint from violence that Trump is bulldozing.”  Norms are fragile and hard to restore once they are gone. He’s dubious that all the analysis out there showing that Trump’s rise is a result of economics or racism is really valid. As he notes, nothing specific has changed in that regard. What has changed, in his mind, are the institutions of American politics. They have failed, and are continuing to fail.
And Nyhan issues a warning that everyone would do well to think a little bit about:

A major party nomination is a powerful thing. Millions of people will instinctively support Trump. Many/most GOP pols will back him.

General elections can be won and lost on chance swings in the economy or foreign policy crises. There are no guarantees at that point.

And even if Trump loses, the exits he could prompt from the party could leave his sympathizers with control of a major party going forward.

Trumpism may yet be revealed as cult of personality with no staying power. He has no factional base or issue to realign party over long term.

But no one should be comforted about the point we’re at with Trump or what it has revealed about the health of our political system.

The genie is out of the bottle. Regardless of where Trump ends up tonight or over the next few months, American politics are unlikely to ever be the same.