Drowned in the bathtub by @BloggersRUs

Drowned in the bathtub 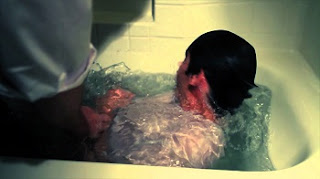 Why yes, we really do mean to drown the government in the bathtub.

Thanks to Congress slowly drowning the U.S. Postal Service in the metaphorical bathtub, the form I put in the mail to my doctor last week traveled 90 miles south and across a state line for sorting before delivery to his office four miles away. Slow death by mandated prefunding of its retiree health benefits means USPS closed the local mail processing facility last year to save costs, worsen service, and keep government from competing with private firms in the delivery business. Article I, Section 8, Clause 7 be damned. The Market demands human sacrifice. (Strange, but its name appears nowhere in the U.S. Constitution, unlike the Post Office. Must remember to look for The Market in the colonial apocrypha.)

It appears The Market now has turned its attention to mortgage giants Fannie Mae and Freddie Mac, both government-sponsored enterprises, or GSEs, with a "utility-like mandate to keep credit flowing in the housing markets." Matt Taibbi examines why the Obama administration is invoking executive privilege to keep secret 11,000 communications covering federal conservatorship of Fannie Mae and Freddie Mac. The administration claims the release would harm financial markets. The federal judge that ordered last week's release says the government simply doesn't want to be embarrassed.

Taibb reminds readers Fannie and Freddie did not cause (but contributed to) the financial crisis. In fact, Treasury Secretary Hank Paulson advocated using them to get bad mortgages off the big banks' books:

Even after the state took over the companies in September of 2008, Fannie and Freddie continued to buy as much as $40 billion in bad assets per month from the private sector. Fannie and Freddie weren't just bailed out, they were themselves a bailout, used to sponge up the sins of private firms.

The original takeover mechanism was a $110 billion bailout, followed by a move to place Fannie and Freddie in conservatorship. In exchange, the state received an 80 percent stake and the promise of a future dividend. All told, the government ended up pumping about $187 billion into the companies.

But now here's the strange part. Within a few years after the crash, the housing markets improved significantly, to the point where Fannie and Freddie started to make money again. Lots of money. The GSEs became cash cows again, and in 2012 the government unilaterally changed the terms of the bailout.

The government would get a 100 percent dividend, not just the money Fannie and Freddie owed. This permanently delayed paying back shareholders who wondered when they would ever see their money again. They filed lawsuits. All the while, Treasury insisted publicly that Fannie and Freddie were "in a death spiral." But they were lying, says Taibbi. Documents unsealed as part of the lawsuits hint at why:

Without getting too deeply into the weeds of this even more complicated tale, government officials have been working with Wall Street lobbyists for years on a plan to have a consortium of private banking interests step into the shoes of Fannie and Freddie.

If this concept actually goes through, it would be the unlikeliest of coups for Wall Street. Having nearly triggered a global depression eight years ago, the usual-suspect, too-big-to-fail banks would essentially be put in control of the same housing markets they all but wrecked last time around.

This would be a nonstarter politically, the ultimate public-relations disaster, were it not for the fact that Fannie and Freddie are about the only companies on earth less popular than the Wall Street banks. Still, replacing the one with the other would be madness by any objective standard.

And if I read this correctly, it would complete the drowning, converting the once government-chartered, secondary market organizations turned GSE cash cows into privately controlled ones. Because The Market wants what The Market wants.