Incentives for the perverse by @BloggersRUs

Incentives for the perverse 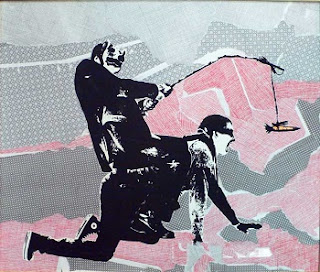 Not all political deflections are bright and shiny. Hyperventilating over public aid to those at the bottom of the wealth curve is an oldie but goody. Is Wall Street defrauding the planet to the tune of trillions? Well, but LOOK! Over there. A poor person. Eating!

Properly incentivizing the poor is a perennial handwringer for Fox News and other watchdogs of personal morality on the right (who otherwise think the government should mind its own damned business). Nicholas Kristof, however, spares some column inches this morning on the incentives driving our beleaguered corporate persons at the top. He gets downright snarky about it:

A study to be released Thursday says that for each dollar America’s 50 biggest companies paid in federal taxes between 2008 and 2014, they received $27 back in federal loans, loan guarantees and bailouts.

Goodness! What will that do to their character? Won’t that sap their initiative?

The study in question comes from Oxfam. The group finds: Such behavior deprives countries of needed funds for everything from education to infrastructure, and feeds the rampant economic inequality that has become palpable. But what's worse, of course, is what these perverse incentives must be doing to corporate persons' souls. Kristof continues:

The Panama Papers should be a wake-up call, shining a light on dysfunctional tax codes around the world — but much of the problem has been staring us in the face. Among the 500 corporations in the S.&P. 500-stock index, 27 were both profitable in 2015 and paid no net income tax globally, according to an analysis by USA Today.

Those poor companies! Think how the character of those C.E.O.s must be corroding! And imagine the plunging morale as board members realize that they are “takers” not “makers.”

But that's the thing about economic inequality. It also means different rules for those on top and those at the bottom. Sharper sticks must be brought to bear to ensure the "takers" are kept off the public dole. To save their souls, of course. Those at the top get sweeter carrots. Much, much sweeter.

Kristof tips his hat to the Obama administration for cracking down on offshore tax havens. But even more, members of Congress should get take a break from call time long enough to pass the Stop Tax Haven Abuse Act, and it should "stop slashing the I.R.S. budget (by 17 percent in real terms over the last six years)."

Snap poll: What sort of incentive do you think Congress responds more to in an election year, carrots or sharp sticks?