Who do you think you're fooling? by @BloggersRUs 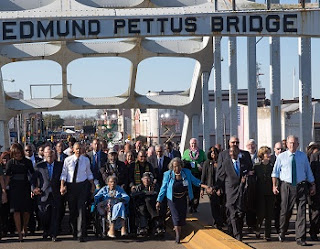 Not that long ago, campaigns here fretted that black voters did not take advantage of early voting. With the exception of Sunday voting (souls to the polls), seeing neighbors at the polls on Election Day was a kind of communal celebration. Responding in the New York Times to Monday's federal court ruling upholding North Carolina's 2013 voting restrictions, Rev. Dr. William J. Barber II, president of the North Carolina N.A.A.C.P., notes how dramatically that changed:

The law eliminated voting rules that had enabled North Carolina to have the fourth best per capita voter turnout in the country. In 2012, 70 percent of black voters used early voting — and cast ballots at a slightly higher percentage than whites. Although black voters made up about 20 percent of the electorate, they made up 41 percent of voters who used same-day registration.

The North Carolina Legislature set out to change those figures and suppress minority votes. Its many impediments to voting all disproportionately affect African-American and Latino voters. None of their attacks would have survived pre-clearance under Section 5 of the Voting Rights Act. A Republican official defended the law this way: “If it hurts a bunch of lazy blacks that want the government to give them everything, so be it.”

Passed in the wake of the U.S. Supreme Court's Shelby decision, the North Carolina "voter ID" law did all of that and more, Barber writes. The bill also "reduces the early voting period and eliminates same-day registration. It expands the ability to challenge voters at the polls. It eliminates a successful preregistration program for high school students."

Election "integrity"? Who do you think you're fooling?

As Barber argues, there was never evidence for voter impersonation to justify the ID requirement. In a 2013 post on North Carolina's Voter Intergrity Project (an offshoot of True the Vote), I wrote about a friend investigated for double voting:

As it happens, I know someone to whom that happened last fall, one of VIP-NC's double-voters. After he voted, Herbert (not his real name) was informed that his vote was contested because records showed he had voted twice. It might be voter fraud.

Here’s what happened. Herbert’s son, Herbert Jr. (same address), voted earlier at a different Early Voting site, signed the log, and the elections clerk mistakenly crossed off Herbert’s name in the voting register. Because this was the Early Voting period, Herbert had time to clear up the mess with the Board of Elections before Election Day. His old ballot was voided and Herbert got to re-vote.

ID cards would have prevented the clerk's error how?

Herbert is black. Early voting protected his vote. The GOP-led legislature slashed the early voting period by a week.

Since the Shelby decision, many states have been emboldened to implement laws like North Carolina’s. Republican-controlled election boards have greatly reduced the number of polling places. Wisconsin recently passed a bill creating major hurdles to voter registration campaigns. Alabama closed driver’s license offices in several counties with high percentages of black voters. But after an outcry, it sent part-time license examiners to those counties.

Two years ago, I wrote this after registration challenges in my county:

Their panic over alleged double voting, suspected voter impersonation (as elusive as space aliens), dead voters and messy voter rolls is because demographic trends show that the numerical edge to which many white Americans feel entitled will evaporate by 2043. They avoided looking at that fact square on for years.

No longer. Our half-black president embodies the trend Time and National Geographic predict will literally change the face of the nation, reducing white America to just another minority in this melting-pot country.

The fear behind the allegations is not about election integrity or race, but power. Who has it and who fears sharing it. (Hint: not Millennials. ) The GOP base knows how minorities are treated in America. For centuries, our European forebears did most of the treating.

Republican supporters and the Voter Integrity Project could register voters and invest more in get-out-the-vote efforts. But with weak faith in their own ideas, they throw smoke bombs into newsrooms and yell “Voter fraud!” loudly and often to create the perception that where there are smoke bombs there must be fire.