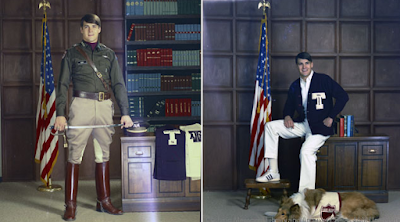 The White House has been occupied by giants. But from time to time it is sought by the small-minded – divisive figures propelled by anger, and appealing to the worst instincts in the human condition.

In times of trouble, there are two types of leaders: repairers of the breach and sowers of discord.

The sower of discord foments agitation, thrives on division, scapegoats certain elements of society, and offers empty platitudes and promises. He is without substance when one scratches below the surface.

He offers a barking carnival act that can be best described as Trumpism: a toxic mix of demagoguery, mean-spiritedness and nonsense that will lead the Republican Party to perdition if pursued.

Let no one be mistaken – Donald Trump’s candidacy is a cancer on conservatism, and it must be clearly diagnosed, excised and discarded...

Donald Trump the reality television star is a great generator of ratings. But Donald Trump the candidate is a sower of division, wrongly demonizing Mexican-Americans for political sport.

It is wrong to paint with a broad brush Hispanic men and women in this country who have fought and died for freedom from the Alamo to Afghanistan. He scapegoats Hispanics to appeal to our worst instincts, when we need a president who appeals to our best.

This is not new in America.

In the 1840’s the “Know Nothings” emerged as a political movement, scapegoating Irish and German immigrants for the problems of the nation.

They were obsessively anti-Catholic, so much so that when the Pope sent marble for the building of the Washington Monument, they smashed it to pieces and helped delay its construction for 35 years.

These people built nothing, created nothing. They existed to cast blame and tear down certain institutions. To give outlet to anger.

Donald Trump is the modern-day incarnation of the know-nothing movement.

He espouses nativism, not conservatism. He is negative when conservatism is inherently optimistic.

He would divide us along bloodlines, when conservatives believe our policies will work for people of all backgrounds.

He has piqued the interest of some Republican voters who have legitimate concerns about a porous border and broken immigration system. But instead of offering those voters leadership or solutions, he has offered fear and soundbites. This cannot stand.

Conservatism doesn’t foment agitation through identity politics. That’s what Democrats do. But as a supporter of socialized medicine, the stimulus package and Hillary Clinton, Mr. Trump is quite suited to follow the Democrats’ example.

I, for one, will not be silent when a candidate for the high office of president runs under the Republican banner by targeting millions of Hispanics, and our veterans, with mean-spirited vitriol.

I will not go quiet when this cancer on conservatism threatens to metastasize into a movement of mean-spirited politics that will send the Republican Party to the same place it sent the Whig Party in 1854: the graveyard.

As a veteran, I took offense to his attack on Senator McCain, and I found lacking his defense that he spent a lot of money on veterans’ parades.

Donald Trump was born into privilege. He received deferments to avoid service in Vietnam. He breathes the free air thousands of heroes died protecting. And he couldn’t have endured for five minutes what John McCain endured for five and a half years.

Think what you want about Senator McCain’s politics, but let no one question his service to our country.

Here was a man offered the chance to go home. He refused, knowing it could cost him his life. There was no way he would leave before any man captured before him. This is the embodiment of duty, honor, country. Mr. Trump does not know the meaning of those words.

But most telling to me is not Mr. Trump’s bombast, his refusal to show any remorse for his comments about Senator McCain, but his admission that there is not a single time in his life that he sought the forgiveness of God.

A man too arrogant, too self-absorbed, to seek God’s forgiveness is precisely the type of leader John Adams prayed would never occupy the White House.

Adams, Lincoln, FDR – they all went before God on bended knee. They all held this office of great power with humility.

When a candidate under the Republican banner would abandon the tradition of magnanimous leadership of the presidency, when he would seek to demonize millions of citizens, when he would stoop to attack POWs for being captured, I can only ask as Senator Welch did of Senator McCarthy, “Have you no sense of decency, sir?”

My fellow Republicans, beware of false prophets. Do not let itching ears be tickled by messengers who appeal to anger, division and resentment.

Resentment is the poison we swallow that we hope harms another. My fellow Republicans, don’t take the poison...

We need a president who rises above personal grievances, petty differences, raw partisan politics. Who puts the nation first, who inspires Americans to believe again and produce again and dream again.

We must move past the empty calories of Trumpism, and return to conservatism.


That's part of Rick Perry's stirring denunciation of Donald Trump's carnival campaign during the primary. He's not known to be the sharpest tool in the shed, but someone wrote him a good speech there and it was important.

Former Texas Gov. Rick Perry, who once called Donald Trump "a cancer on conservatism," said Friday he would be willing to serve as the presumptive Republican nominee's vice president.

Perry said he will do whatever he can to help Trump -- including joining him on the Republican ticket in November.


"I suspect I'm going to be helping him in a myriad ways -- but if it's the vice presidency, if a cabinet position is where he needs somebody with my experience then I'm not going to go back to Texas and say, 'Aw shucks sir, I'm gonna go fishing.' I'm gonna go serve my country," Perry told CNN backstage at the National Rifle Association's annual meeting.

Perry told Republican donors Wednesday on a conference call hosted by Great America PAC, a pro-Trump group, that he would help Trump any way he could "within reason" and appeared to make his case for the vice presidency -- pointing to his foreign policy and government experience just as he talked up those same qualities as those Trump should look for in selecting a running mate.
Asked Friday whether the vice presidency was "within reason," Perry was blunt: "Of course it is," he said.


It's funny how so many macho dudes are now servile Trump sycophants.