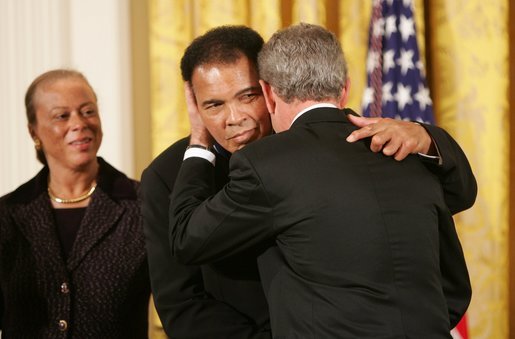 Now Ali, "The Greatest." Tributes are pouring in from across the planet for Muhammad Ali, the three-time World Heavyweight Champion who captured boxing and the world through, speed, skill, and sheer force of personality after he upset Sonny Liston in 1964. Ali, 74, died at a Phoenix-area hospital last night after a long decline from a respiratory illness aggravated by Parkinson’s. Ali died a Sufi Muslim.

A report in the New York Times quotes Jim Murray of The Los Angeles Times on Ali's talents, “He didn’t have fights, he gave recitals.”

The “Rumble in the Jungle” against George Foreman (1974, Zaire, now the Democratic Republic of the Congo) and the “Thrilla in Manila” against Joe Frazier (1975) are legendary. But outside the boxing ring, as his Wikipedia entry notes, "Ali's actions as a conscientious objector to the [Vietnam War] made him an icon for the larger counterculture generation." Born Cassius Marcellus Clay, Jr., Ali converted to Islam at 22, changed his name, and in 1967 refused induction into the army claiming "his Muslim beliefs forbade him to go to war." His conviction for draft evasion was overturned by the Supreme Court in 1971 and he returned to the ring.

Judged purely for his boxing skills, Mr. Ali ranks among the greatest heavyweights ever, alongside Joe Louis, Jack Johnson, Jack Dempsey and Rocky Marciano. But he possessed a quality that reached beyond his accomplishments in the ring to make him recognized by millions the world over.

Even in his diminished physical state, Mr. Ali was admired not just as a supreme athlete but as a hero, as a symbol of understanding and hope. Presidents sometimes called on him to make diplomatic visits abroad, and in 1990 he helped return several U.S. hostages held in Iraq.

A 1996 documentary about Mr. Ali’s 1974 battle with Foreman, “When We Were Kings,” won an Academy Award for best documentary. A Hollywood feature film about his life, starring Will Smith, was released in 2001.

This obituary in the Los Angeles Times perhaps best captures the man in one paragraph:

If Jesse Owens and Jackie Robinson opened the door for black athletes, Ali stormed through, making sure it would never close again. His celebrity transcended race and sports, for as dexterous as he was in the ring, he was equally skilled at challenging the status quo. Guided by his religion, bolstered by his popularity, he tempered his righteousness with an ever-quotable wit and a prevailing sense of cool.

Sports Illustrated writer William Nack described Ali's life as "so brassy and daring, so filled with wonders and adventure and so enlarged by the magic of his personality and the play of his mind, that no one remotely like him has ever been seen on the sporting scene."

Ali's cocky, taunting poetry before fights is what I best remember. As The Los Angeles Times writes, Ali "turned bragging into an art form." This jaunty bit prior to the “Rumble in the Jungle” is classic Ali:

"I've done something new for this fight. I done wrestled with an alligator, I done tussled with a whale; handcuffed lightning, thrown thunder in jail; only last week, I murdered a rock, injured a stone, hospitalized a brick; I'm so mean I make medicine sick."