I love the smell of Cleveland in the morning by @BloggersRUs

I love the smell of Cleveland in the morning 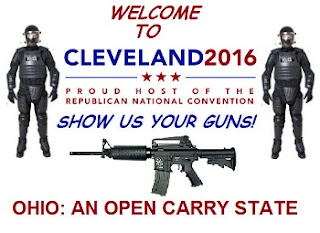 “What you won’t see is any military-style equipment," Cleveland Police Department deputy chief Ed Tomba told reporters in May in advance of the Republican National Convention. That stuff will be carried by civilian gun-rights advocates — in spite of the Cleveland Police Union's unheeded plea to Gov. John Kasich to suspend Ohio's open-carry law during the convention. The gun-rights rally Northeast Ohio Open Carry planned for downtown Cleveland yesterday afternoon attracted just two people.

Except for its new Bat-cycles, Cleveland will keep its fifty million dollars in new federally funded riot gear, steel batons, and tactical armor largely out of sight as the Republican National Convention begins today.

No worries. The city has built in extra buffer times to keep legally armed protesters separated from hippies prohibited from carrying toy guns, umbrellas with sharp tips, tennis balls and canned goods. So, it's all good.

But the possibility of street disturbances is not the reason so many GOP leaders are staying away from the Republican presidential nominating convention. Donald Trump simply doesn't smell like victory. Politico reports:

Only 17 percent of GOP insiders said they are more excited about this year’s convention than in past years — though many of their comments were mordant. Numerous insiders compared the convention to a train wreck or car accident.

“Excited in the way one can’t stop staring at a train wreck,” said a Pennsylvania Republican who is “more excited” about Cleveland. “It's a mixture of disgust and fascination.”

“Conventions are usually about being excited for your party’s nominee,” an Ohio Republican said. “This one is about how to help the other people you care about while you have the top of the ticket embarrassing you.”

What's embarrassing is how Trump says out loud what "politically correct" Republicans have known for years to say only in dog whistles. I have said before that the Republican M.O. is this: Find the line. Step over it. Dare someone to push them back. If they don't get pushed back, they've established a new normal. It's the Overton Window for bullies. Donald Trump has dispensed with lines altogether. And with dog whistles. And with truth.

“There is something very belligerent about the way he presents facts, as if he thinks nobody will have the balls to stand up to him,” said Richard C. Seltzer, an attorney who faced Trump in several real estate lawsuits. So far, nobody in Republican leadership has had the "balls" Sen. Elizabeth Warren has had for counter-punching Trump. He had best thank his lucky stars Warren doesn't show up in Cleveland.

What is scarier than a Trump nomination is a Trump win in November (as unlikely as that now seems). And it's not just what Trump might do as president. A friend observed over the weekend at the Netroots Nation conference, the conservative takeaway from a Trump win will be that there is no longer any need to be polite about hiding the animating passions of the base. They will feel free to unleash the Furies.