“You have sacrificed nothing!” by @BloggersRUs

“You have sacrificed nothing!” 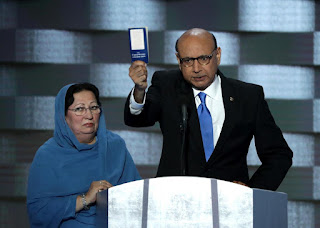 It was hard to imagine the final night of the 2016 Democratic Convention could be more dramatic than the first three. The heavy hitters had spoken Monday, Tuesday and Wednesday: Michelle, Elizabeth, Bernie, Joe, and Barack. Secretary Hillary Clinton's historic acceptance speech as the first woman nominated for U.S. president was expected to be the best of her career. It was. But as she herself admits, "I get it that some people just don't know what to make of me." She does not pretend to be a great speaker. Sometimes it's not oratorical skill that matters.

When the parents of a fallen American Muslin soldier, 27-year-old Army Captain Humayun S.M. Khan, stood on stage to speak of their sacrifice and that of their son, it was the most iconic moment of the convention. I couldn't have been the only one undone by Khizr Khan. Donald Trump certainly was, but not in a good way.

One of the things that most infuriated Republicans in the 1990s about Bill Clinton was how he appropriated what they saw as "their' policy positions. This week, under Hillary Clinton, Democrats took back the flag and patriotism too. One wonders what besides anger and resentment Republicans have left.

Humayun Khan was born in the United Arab Emirates and immigrated to the U.S. as a small child, growing up in Maryland and attending college at the University of Virginia. He was a 27-year-old Army captain when he was inspecting the gates of his camp in Baquba, Iraq, and a speeding vehicle approached. Khan told his fellow soldiers to hit the ground and he signaled at the vehicle to stop. He took 10 steps toward the vehicle, which had in it two suicide bombers and a large amount of explosives. The car exploded, injuring 10 of his fellow soldiers and killing Khan. The captain was posthumously awarded the Bronze Star and the Purple Heart, and Khizr Khan believes his son’s actions saved the lives of many of his fellow soldiers.

That's all you need to know. Watch.