Walked right into it by @BloggersRUs

Walked right into it 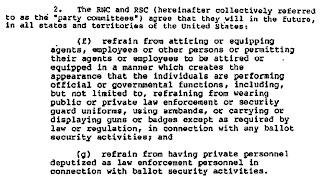 At his Election Law Blog, Rick Hasen brings up a possible violation-by-Trump of the decades-old consent decree I mentioned recently. To get a sense of why this 1982 settlement exists, click on the image above and read it. Also read pages 9-13 (Operative Facts) from the original complaint by the DNC and New Jersey State Democratic Committee.

With Trump’s dangerous and irresponsible hyperventilating about voter fraud and cheating in Pennsylvania potentially costing him the election, it is probably no surprise, as reported by the Weekly Standard, that Trump is seeking “election observers” to stop “Crooked Hillary” from “rigging this election.” However, there’s a longstanding consent decree that bars the RNC afrom engaging in such activities.  Here’s Tal Kopan and Josh Gerstein, reporting in 2013 on the RNC’s unsuccessful attempt to get the Supreme Court to lift the decree:

The Supreme Court on Monday declined the Republican National Committee’s request to lift a three-decade-old court order that limits the national GOP’s ability to challenge voters’ eligibility at the polls.

The case, Republican National Committee vs. Democratic National Committee, dealt with a consent decree issued in 1982 that prevents the RNC from engaging in some voter fraud prevention efforts without prior court consent. It specifically said the RNC could not engage in ballot security efforts (later defined in 1987 as “ballot integrity, ballot security or other efforts to prevent or remedy vote fraud,” according to the U.S. Court of Appeals for the Third Circuit opinion), especially in areas where racial or ethnic makeup could be considered a reason for the activities.

A response to claims of voter intimidation in minority areas in the 1970s and early 1980s, the decree allowed the RNC to continue “normal poll watching” operations while barring activities that could be aimed at voter suppression, though the RNC complained to the courts that the distinction was unclear and difficult to follow. The decree effectively put the national party on the sidelines as concern about voter fraud became more and more pronounced in GOP ranks in recent years and as states passed a series of voter-identification measures.

In deciding the case, which stems from a 2008 lawsuit brought by the DNC, the district court clarified ballot security efforts as “any program aimed at combating voter fraud by preventing potential voters from registering to vote or casting a ballot,” and upheld the consent decree while adding a Dec. 1, 2017, expiration date.

In the consent decree, “The RNC agreed that the RNC, its agents, servants, and employees would be bound by the Decree, ‘whether acting directly or indirectly through other party committees.” Does Trump count as the RNC’s agent in these circumstances?  They are certainly acting in concert, and it is plausible to argue that Trump and the RNC are agents of each other for purposes of this election. Also, the activity Trump is talking about engaging violate the consent decree?  One thing the consent decree says is that they must:

If this activity violates the consent decree, the DNC can ask for it to be extended for up to another 8 years.

Trump has walked his party right into it. The DNC should indeed seek an extension. Letting the decree lapse at this point would be a mistake. The Roberts Supreme Court eliminated the preclearance provision of the Voting Rights Act because, you know, times have changed. But we know what happened next.