Keeping it (un)real by @BloggersRUs 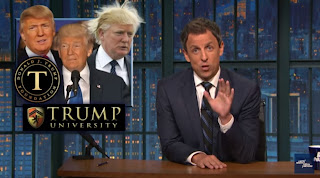 Just last night, Seth Meyers lampooned Donald Trump and Chris Christie over Trump's Friday faux press conference/hotel infomercial that supposedly put an end to birtherism. Christie tried to rewrite history by claimed Trump had dropped the matter in 2011. So Meyers played clips of Trump questioning whether Barack Obama's birth certificate is real from 2011 through 2015. Meyers quipped, “And by the way, I’m not sure the guy who holds fake press conferences, has a fake university, a fake foundation, fake hair, and a fake tan should be the one in charge of deciding what’s real.”

What's real about Hillary Clinton and what's not has been an issue for her campaign. Struggling to connect with voters under 35, she is running on the most progressive platform in her party's history, one heavily influenced by Bernie Sanders' ideas. But millennials were not exactly gushing at a speech she gave Monday at Temple University:

Clinton’s speech came as some polling has found that young people opposed to Trump have gravitated towards the two main third party candidates -- the Green Party's Jill Stein and former New Mexico Gov. Gary Johnson, the Libertarian candidate -- rather than to the Democratic nominee. Clinton also lagged with young voters in her primary against Sen. Bernie Sanders (I-VT). On Monday, Clinton acknowledged the struggles she’s faced with millennials.

“Even if you are totally opposed to Donald Trump, you may still have some questions about me -- I get that and I want to do my best to answer those questions,” Clinton said.

But post-convention, Jim Newell writes at Slate, her focus has been "moderate, suburban Republican-leaners." So Clinton tried to address some of their concerns in an op-ed yesterday at Mic:

First, everyone who wants to go to college should be able to without drowning in debt. That's why I worked with Sen. Bernie Sanders to design a plan that will let everyone attend college debt-free. If you already have loans, we'll let you refinance them, defer them to start a business or forgive them if you spend 10 years in public service. You can even see how much you and your family could save under our plan by looking at the "college calculator" on our website. And we'll make sure a four-year degree isn't the only path to a good-paying job by supporting apprenticeships and other high-quality training programs.

Second, everyone should be able to get a job that pays the bills and can support a family. And not only that, you should be able to do work you love and find meaningful. So we'll create more good-paying jobs, raise the minimum wage and guarantee equal pay. This will help a lot of Americans, especially young people struggling to find footing in a difficult economy.

Third, no new parent should have to face the impossible choice between caring for a child or family member and losing a paycheck or even a job. It's outrageous that in 2016, the United States is the only developed country in the world without paid family leave of any kind. So we'll make high-quality child care and preschool available to every family in every community. I've spent my career fighting to make a difference for children and families, and I can't wait to do even more as president.

Of course, to do any of these things, we can't have secret unaccountable money poisoning our politics. So I'll appoint Supreme Court justices who will overturn Citizens United and even propose a constitutional amendment to do the same. And by doing that, we'll make sure that no special interests can get in the way of protecting and expanding civil rights, LGBT rights and all human rights.

Many of you have shared with me that it feels like you're out there on your own — like no one has your back. It shouldn't be that way. If I'm fortunate enough to be elected, you will always have a champion in the White House. But I can't do it on my own. I need you to work with me, keep fighting for what you believe, hold me accountable. I can't promise we'll win every fight on our first try. But I can promise you this: I'll never stop fighting for you.

The policy-speak demonstrates what Clinton said of herself at Temple, “I will never be the showman my opponent is, and you know what? That's okay with me.” And it should be okay with voters. We're hiring a president, not searching for soulmate on Match dot com.

But running through this targeted demographic’s laundry list isn’t enough. It doesn’t get to the core of the problem, which is: character, and Clinton as the embodiment of a political insider. It’s on this fundamental question of trustworthiness where Clinton faces the steepest climb among young voters. Both she and her team were wise enough to understand that in crafting the speech.

A Quinnipiac national poll released last week asked likely voters if they believed Clinton was honest or not. Overall, 32 percent said she was, compared to 65 percent who said she was not. That ugly picture was bad across all age groups, but worst among young voters: Only 21 percent of 18-to-34–year-olds said she was honest, compared to 77 percent who did not. By contrast, 27 percent of those 18 to 34 said Donald Trump was honest. (Which is not to say they all view this as an asset in him.) Another question asked whether Clinton “bases her policies on a set of core values” or “does whatever is politically convenient.” Thirty-nine percent of likely voters overall said “based on core values,” but only 25 percent of 18-to-34–year-olds did. Clinton’s poll numbers suggest she’s outperforming her character numbers among these demographics—i.e., she’s still earning the votes of many young people who believe she’s wholly dishonest. But she needs to repair this image if she’s going to get much further, and there are only 50 days left to do so.

That's going to be tough, especially for a generation born into a world of right-wing talk radio, Faux News, faux scandals, and relentless anti-Clinton propaganda. Much of what people know of Hillary Clinton falls into the "everyone knows" category. Everyone knows she's a serial liar, corrupt, and untrustworthy. But how does everyone know what they think they know? Is what they know true, or do they simply feel like it's true? Because that's truthiness, the term Stephen Colbert invented to poke fun at people who think with their guts instead of with their heads. (I'm trying to remember a time the "neoliberal warmonger" threatened to take the country to war over someone flipping off our sailors.)

After being steeped in twenty-five years of anti-Clinton propaganda myself, I don't claim any kind on immunity. I don't even believe what I think I know about her. But I'm damned sure the people who who worked oh-so hard at stuffing my head with propaganda didn't have her best interests in mind, or mine. So I focus Clinton's long list of accomplishments and policy proposals. They are not feelings. They are on the record. What's Hillary Clinton really like? People who actually know her speak glowingly. Me? I don't know for sure. But I know what her opponents are like. Their deeds on the record too.